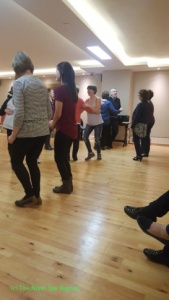 When we first got to Ireland, we were told that every Thursday night there was the opportunity to partake in dance lessons. As someone who spent fifteen years of their life dancing, hearing this made my ears perk up. We were told that we had the option to attend something called Irish set dancing. I had never heard of that and wasn’t really sure what I had signed myself up for when I walked through the doors to the Derrylahan Thursday night.

Being that it was our groups first time attending the dance lessons we were uninformed of the fact that the instructor comes at 8:30 not 8 o’clock as we originally had been led to believe. This left us sitting in a pub waiting for a half an hour but the time went by quickly as I talked with other students about where they planned on traveling over different school breaks. One of the other students, a boy named Zach, had only gone to the pub to eat dinner, but of course he ended up being dragged along to the dance class. Before we knew it we were being ushered into a room connected to the pub by a hallway.

[Zach and Allie dancing with two women from Luisburgh]

The room had all wood floor with chairs facing a dance floor just waiting for us to begin. A thin curtain separated the room in half. On the side, opposite of the side we were on several tables and a bar were all set up. It looked like the kind of place where wedding receptions or banquets were held. Although the heaters were all on high, the room still had a sharp chill to it.

Most of us students choose to keep our coats on to begin. The instructor told us each to pair up and form two circles, each circle having four “couples”. Because the majority of the class was older women, some women had to take the place of the man in the dances. The instructor slowly went through the first set step by step. My partner happened to be my good friend Allie. Because Allie is much taller than I am, the instructor suggested she take the lead position.

Allie and I struggled through the first set because neither one of us had ever been taught how to waltz and there were several times throughout the first set where waltzing was required. After being led step by step through the first set, we were all warm enough to shed our jackets. The instructor played the music for us before we began. Allie and I looked nervously at each other because of the fast beat of the music. We both know that if we messed up we would mess everyone else up too. Luckily for us, we both turned out to be a quick study. 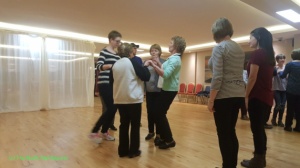 After the first run through of the set we began to allow ourselves to relax and enjoy the dancing. It was so fast paced that it turned out to be more than just a dance, it became a work out. As time went on, more people joined the class, which was a good thing because after dancing a couple times in a row, a water break was much needed. Throughout the remainder of the class, we learned two more sets. Each one slightly more difficult.

Sometimes Allie and I would split up and be partners with the locals which was always a fun little treat. You could definitely tell who attends class regularly and who doesn’t. Those who attend class regularly are often great leads. They always spin you of into the right direction and the don’t hesitate to tell you when you have missed or added an extra step.

On one of the short breaks that I got from dancing, I looked around and for the first time I saw what was really going on. All the other students, as well as the majority of the locals, had smiles on their face and sweat seeping through their clothes. When someone would mess up it was often noted but brushed of quickly with a laugh. The enjoyment of the activity by everyone participating was clear to anyone with eyes. It was official: Irish set dance lessons was going to become a Thursday night routine.

[Video caption: Everyone dancing the first part of the set]