Ukraine has always been the target of surrounding empires – the Ottomans, Poland-Lithuania, Austria-Hungary, Russia, France, Nazi Germany, and the Soviet Union – who have harbored ambitions to conquer and use its resources. Marcy Kaptur (D-Ohio), co-chair of the Congressional Caucus on Ukraine, is right in pointing out that “in the history of the 20th century there is no place on earth where the soil is more blood-soaked than [in Ukraine].”

The newly established government, which is heavily supported by the northern and western regions of Ukraine, is viewed as pro-Ukrainian and pro-EU. In contrast, most of eastern and southern areas of Ukraine share pro-Russian views. Claiming that the new government might suppress the interests of ethnic Russians in Ukraine’s Crimean peninsula, Russia sent troops to the Autonomous Republic of Crimea. The new government fears that Russia might use the same reasoning for sending troops to the eastern and southern parts of Ukraine.

You can find a wide range of opinions on what is happening in Ukraine and who is to blame, but I think that the image on the left illustrates the situation well: most people are fighting against each other on minor issues (such as language) instead of focusing on larger issues (poverty, corruption) that everyone in Ukraine shares, regardless of ethnicity, language, religion, and political views. 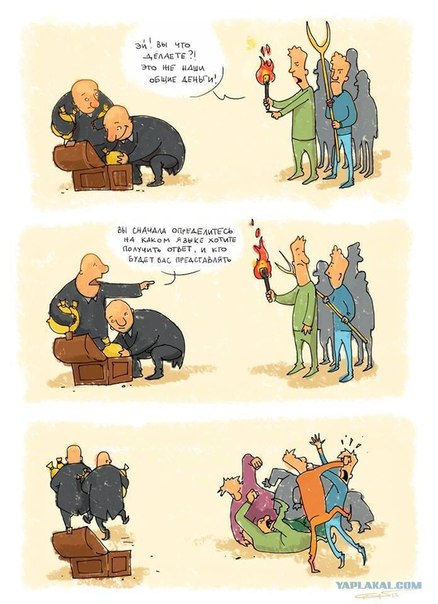 Ukraine could take advantage of its unique position as a neutral zone between the European Union and Russia,  but those in power are pursuing their short-term goals of splitting the country into two hostile sides (Russian and Ukrainian), stealing as much as they can, and leaving piles of unsolved problems behind. As soon as I have a source of income, I want to invest in the people of my country who think beyond cheap politics and have a long-term vision of a peaceful and prosperous Ukraine where everyone is treated equally regardless of who they are. You’re welcome to join me on this “venture”.