World History and the Meaning of Being Human – Myths, Storytelling, and Elephants – by Isabella Restrepo Toro. The North Star Reports: Global Citizenship and Digital Literacy, at NorthStarReports.org and facebook.com/NorthStarReports

World History and the Meaning of Being Human – Myths, Storytelling, and Elephants – by Isabella Restrepo Toro. The North Star Reports: Global Citizenship and Digital Literacy, at NorthStarReports.org and facebook.com/NorthStarReports 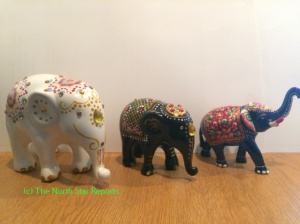 While thinking about creation myths, I decided to focus on the elephant, an animal very fond to me and my family as it symbolizes what we believe to be is the best qualities of a community. In my research I found that elephants are seen in various places of the world as symbols of abundance, fertility, richness, boldness, strength, wisdom, and royalty. These animals as described as noble, supporting and kind qualities that are seen in many stories about them around the world. For instance the o The Ashanti of Ghana relate that an elephant is a human chief from the past, therefore associating this animals with royalty and even giving the noble burials when found dead.

Three main creation myths were mentioned regarding elephants. One states that Airvata, the first elephant, was born from the twirling ocean. Another, states that Brahma created elephants. However, my favorite and most detailed story about the creation of elephants comes from Kamba, Kenya which tells the story of a poor man that decides to find Ivonya-Ngia, the feeder of the poor, to find the secret to his abundancy. Ivonya-Ngia gives him in return a flask with an ointment and tells the poor man to rub this on his wife’s pointed upper teeth and to sell them once they have grown. As instructed the poor man comes back home and applies ointment on his wife’s canines which over the weeks grow into tusks. The poor man pulls them out and in sells them increasing his richness tenfold. However, the wife’s teeth keep growing longer and thicker, and her body started becoming heavier and greyer everyday, until she decides to go live in the forest where she gives birth to a male elephant. This was the origin of the elephant species and it explains why elephants are as intelligent as people.

Continuing, there are many stories that involve elephants in which they are shown as important figures. To begin with, a legend explains that various elephants support Earth, and that when natural disasters happening such as earthquakes and flooding it is due to an action the elephant is doing. The amount of elephants is not clear but they all agree that they represent the cardinal directions from the Solar System in the galaxy. This story about the elephants regarding their position and movements are all connected to the “Great Milky Way Mother” in which the elephant’s force is seen as emerging from the Milky Way center.

Similarly, elephants have been seen as a symbol in the Buddhist tradition mostly is two tales. The first one explains that Buddha was an elephant with six tusks in the womb of his mother, which according to the Jaina tradition explains why the mother of the twenty-four thirthankars had dreams of an elephant. Buddha is also present in the second anecdote which explains that Buddha incarnated into a white elephant several times. According to one version of the Buddhist story meant to teach that revenge is not a good thing, Chaddanta, a white elephant with a scarlet face and feet and six tusks, one of Buddha’s reincarnations, lived with two wives. One of the wives, Chullasubhadda, gets offended as Chaddanta gives the other a lotus flower and decides to take revenge which ends with the death of both Chaddanta and the other wife.

Also many religions in the Western hemisphere had a deity with an elephants head including Balarama, Skanda and Aiyanar. One of the most well-known elephant symbols in the Hindu religion is Ganesh. One of Hindu story describes that Ganesh was created by the goddess Parvati, as she wanted a son. Her husband, the god Shiva, was travelling when this boy was created and so when he saw the boy he got startled and killed him. Parvati was so enraged and Shiva so distraught, that Shiva asked his soldier to cut the head of the first living creature they encountered, which was an elephant. The story ends with Shiva attaching the elephant’s head to the Ganesh body, breathing life into him and accepting him as his own son.

All of these myths and stories share a few aspects with those we saw in both our first film about people at the Amazon as well as from various communities in our textbook. The biggest difference is that they mostly include a deity or many of them, which is seen in the example previously mentioned from the Hindu stories and in the story about the creation of humans in a dance for their goddess in the film. Also, all of these myths have natural aspects on them, meaning they all have animals or vegetation, to mention a few, to represent certain events and symbolize things important to the people. Similarly, myths in the textbook, the film and those above about elephants, all include humans as a major aspect of them. They all seem to have a human representation on them and teach humanity something about the world. Finally, all of the myths we saw are in a way explaining the connection between humans, the universe, the environment and the gods. A contrasting aspect between the ones mentioned in the movie and the film, and those about elephants in that, they talk about the creation of different things that are sacred to the culture that is the creator of the myth itself.
Founding myths are a universal feature in the human experience as they always show that humans are trying to explain their surroundings through things that they have previously known. The existence of myths in a way makes us human, as it allows us to connect to others through symbols important to a community, therefore allowing us to be part of something larger. It also exposes that humans are multifaceted as while it is a species that can be materialistic and selfish, as shown in the myth with the husband and his long-tusked wife, they are also capable of doing this out of love as shown in the final story about Ganesh. Finally, myths make us humans in the sense that they prove we are teachable not only through its characters, but also through the fact that we still know of them even when decades have passed since they were originated. It is through myths that a community gets a story, a passion and a culture.

33 responses to “World History and the Meaning of Being Human – Myths, Storytelling, and Elephants – by Isabella Restrepo Toro. The North Star Reports: Global Citizenship and Digital Literacy, at NorthStarReports.org and facebook.com/NorthStarReports”