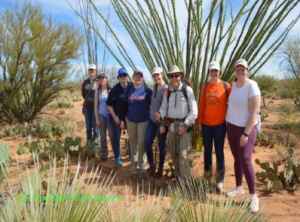 (Our group with Bob, a Tucson Samaritan, on a hike in the desert and the border wall, March 2018)

Over spring break, I went with CSS Campus Ministry on an Alternative Break Experience to Arizona. The trip was originally supposed to include a day trip across the Mexican border, but the travel advisory for along the border of Mexico increased so we were not allowed to cross. The trip was not a service-based trip, unlike many of the other ABE trips that Campus Ministry organizes, instead it was a learning-based trip because there is much to learn about immigration and culture down on the border. Going into the trip I was most excited to experience a different culture than my own Midwestern culture and to use my Spanish because I am working on a Spanish major. While we were in Arizona we stayed with a four Sisters from the School Sisters of Notre Dame order. Everyone we met was super informed and hospitable and overall our time in Arizona was amazing.

We spent two days in Tucson, Arizona with a couple of Tucson Samaritans. This group is very active in the Pima county area and they often leave water in the desert and mountains for migrants. We also got to participate in leaving water for migrants, but we had to spend quite a few hours of hiking to get to more remote areas of the mountains. However, the desert hike was not a long distance, but every plant was prickly, so it took a few hours of cautious walking just to go a couple of miles. I was not expecting the mountainous terrain of the Southwest, but the desert did live up to my painful and dry expectations. The days we spent hiking were the days we put ourselves in a migrant’s shoes and walked the same paths that many people may have taken for a variety of reasons. 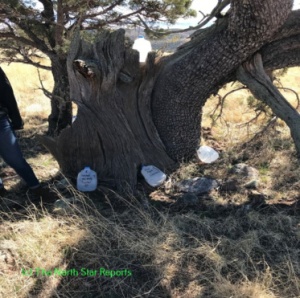 For the majority of the week we stayed in Douglas, Arizona at the Sisters house. Here we met many people from the community such as faith leaders and border patrol officers. On the U.S. side the Douglas community focuses a lot on remembrance for the 306 migrants that have been found dead in the small town of Douglas. Overall, in Pima county Arizona there has been roughly 4,000 bodies found of presumed or known migrants, but many people think the death total is more around 7,000. While we were in Arizona, we realized that migration deaths increased in correlation with the most recent building of the border wall. We spoke with people who live on both sides of the border and they talked a lot about the current wall placement, but also about the trade deal NAFTA and how that has affected the flow of migration.

First off, the current larger bars of the border wall were slowly put in place to keep the flow of migration out of certain cities. Starting with San Diego and then El Paso. The border walls statistically did keep migrants from crossing over those cities borders, but the statistics did not consider that migrants were simply entering at different and less patrolled, more rural locations. Secondly, with the implementation of NAFTA the agricultural system in Mexico crashed because it became cheaper for Mexico to import U.S. produce rather than to try and compete with the United States’ agriculture. Long story short, this gave Mexico economic problems which caused a lot of people, specifically young men, to migrate to the U.S. to look for the economic stability that NAFTA had taken away from them.

The strengthening of security in certain areas has had unforeseen effects on migration and added danger to the frequented ways of passage. In other words, there have been so many recent deaths in Arizona because they have the dryness of the west desert and the harsh terrain of the mountain ranges. When the current border walls were built these dangerous geographically areas were left less patrolled because they were seen as “natural” or lethal deterrents to migration and the U.S. government thought migrants would know better than to try and cross in those areas. However, this is not the case and in the last 20 or so years they have seen an increase in deaths because of dangerous migration paths.

Overall, it was an eye-opening experience because in the North we do not always learn about the border history between the U.S. and Mexico or know the different mix of cultures and life that has been formed in the Southwest. My biggest take away would be that immigration policy is the most important reform that needs to be made to help make legal immigration easier for people who want to migrate. Migration is a normal human occurrence that has been happening since the beginning of time. Today, we have made something so natural a criminalized offence without trying to understand what is pushing or pulling a migrant to want a new life and be desperate enough to risk death. I believe that making immigration to this country easier and less financially taxing would decrease the flow of undocumented immigration and in turn help stop the deaths that occur because of the harsh terrain and lack of water in the Southwest.