Alphabet Soup on the Steppes: Language Reform in Kazakhstan – by Marin Ekstrom. The North Star Reports: Global Citizenship and Digital Literacy, at NorthStarReports.org and facebook.com/NorthStarReports

Alphabet Soup on the Steppes: Language Reform in Kazakhstan – by Marin Ekstrom. The North Star Reports: Global Citizenship and Digital Literacy, at NorthStarReports.org and facebook.com/NorthStarReports 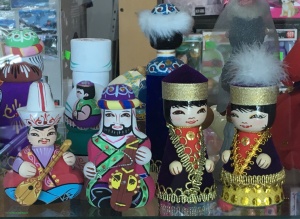 A language’s writing system, if it has one, seems integral to its identity. After all, who can imagine English without its ABCs, Chinese (中文) without its thousands of ideographs, or the right-to-left flowing curves of Arabic (العَرَبِيَّة) ? It is true that a language’s writing system has a major influence in shaping a nation’s cultural and linguistic character. However, it is often times more arbitrary than one would expect. Case in point: Kazakhstan. In the course of approximately 100 years, Kazakhstan has changed its writing system multiple times: Қазақ тілі / Qazaq tili / قازاق ٴتىلى all represent the same language (the phrase, by the way, translates as “the Kazakh language” ). The history of the Kazakh language is a case study in how national and linguistic identity is often more permeable than one would expect; at the same time, certain enduring features of language and culture can help preserve identity through times of tumultuous change. 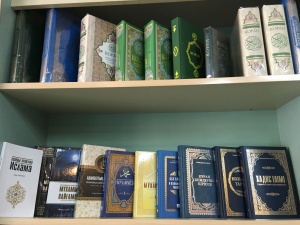 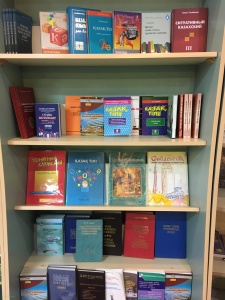 [Kazakh language books in the (soon-to-be obsolete) Cyrillic script. Kazakh folklore (the books to the side of it are written in Russian). Qurans and other Islamic texts]

Kazakh is part of the Turkic language family. It is related to such languages as Kyrgyz, Uzbek, and Turkmen (some of its neighboring countries), as well as Turkish. The earliest-known Kazakh writing system was a set of ancient Turkic runes known as the Orkhon-Yenisei script. In the 8th century, Islam spread to Kazakhstan and quickly became the dominant religion in the country. As a result of this religious influence, Kazakhs adopted a version of the Arabic script for their writing system; this system was subsequently used for centuries and is still in use amongst ethnic Kazakhs living in China, Afghanistan, and Iran. In the 1920s, authorities representing the newly established USSR decided to replace the Arabic script with a Latin-based one. They believed that the Arabic script represented loyalty to old traditions, and believed that a Latin script would forge a modern transformation for Kazakh identity. In 1940, the Kazakh language underwent yet another major change by adopting a Cyrillic-based alphabet. Soviet authorities wanted Kazakhstan to remain loyal to Russia, the most powerful Soviet republic, and believed that sharing a common alphabet would bind the countries more closely together. The Cyrillic alphabet is currently the system in use today. That status will not last for long, however, as President Nursultan Nazarbayev announced that the Kazakh government has begun developing a new Latin-based script that will come into effect by 2025. The Kazakh government claimed that this switch has both cultural and practical implications. From a cultural perspective, the government stated that changing the Kazakh alphabet would serve as a way to distance itself from its Soviet past. From a practical standpoint, the government noted that “…the Latin alphabet is the most widely used writing system in the world and is used by approximately 70% of countries” (Sarzhanov, 2017); furthermore, technological and digital communication is more widely processed through Latin-based systems than other ones. The government thus believes that adopting a Latin alphabet would make Kazakh more accessible to fellow Latin-based countries, and in turn would promote greater intercommunication, business investments, Kazakh language learning initiatives, and other such positive impacts. While the push for Latin writing reform has also met its fair share of criticism, it is very likely to go through in a few short years. Thus, for the 21st century at least, the Latin-based script seems to be the en vogue option for helping to determine Kazakh identity. 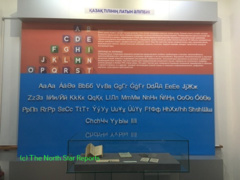 [A side-by-side comparison of the soon-to-be implemented Latin script with their Cyrillic counterparts.  The Kazakh National Museum ]

The case of Kazakhstan is far from the only example of alphabet reform (in fact, it is a shared experience amongst several former Soviet republics). But it portrays a vivid example of how cultural and historical factors can affect national identity in a very drastic and sometimes rapid manner. The Kazakh writing systems reflect how such factors as Islam (the Arabic script), Soviet rule (the Cyrillic script), and now globalization in the digital age (the Latin script) have significantly impacted both its self-conceptualization and its cultural alliances. Nevertheless, the Kazakh people have fought remarkably hard to preserve the key features of their language and culture. This fact is especially prominent in the oral Kazakh language, which has preserved many of its unique features throughout history. That is the key takeaway of this case study: although writing system changes have significantly impacted Kazakhstan, the essence of the Kazakh language and identity have remained intact…and it will continue to do so for many more generations ( and possible writing system reforms) to come.

31 responses to “Alphabet Soup on the Steppes: Language Reform in Kazakhstan – by Marin Ekstrom. The North Star Reports: Global Citizenship and Digital Literacy, at NorthStarReports.org and facebook.com/NorthStarReports”