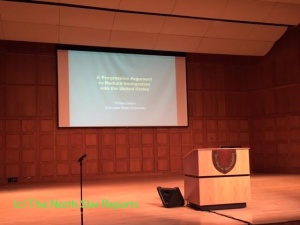 On the evening of the 27th of September, the College of St. Scholastica was visited by award-winning lecturer of Middle Eastern history James Gelvin. Gelvin gave a lecture that in an hour briefly summarized the historical background to the conflict between Israelis and Palestinians, and mainly focused on the events that took place from the early to late 20th century.

A man of impressive credentials, Gelvin graduated with an M.A from the School of International and Public Affairs of Columbia University in 1985 and received his Ph.D from Harvard University in 1992. He has published extensively on the topic of the Middle East, with a long list of articles and six books to his name. In 2015, he was awarded the Undergraduate Teaching Award from the Middle East Studies Association, citing his “outstanding commitment to the practice and substance of undergraduate teaching, through his classroom performance, his training of future generations of undergraduate teachers, and his well-received undergraduate textbooks” as motivation.

Addressing his audience in a tightly packed Mitchell Auditorium, Gelvin started his lecture by placing the Israel – Palestine conflict in a global perspective, highlighting the fact that Israel and Palestine together have a population of about 19 million, and that is when counting in the Palestinian diaspora population as well. Also, the territory that is Israel today is roughly the size of New Jersey. Furthermore, the Israeli – Palestine conflict has since Israel was proclaimed a sovereign state in 1948 claimed 150.000 lives in total. Even though this of course is a number that bears witness of the severity of the conflict, it pales in comparison to other Middle Eastern and global wars. For example, in the Iran-Iraq war that raged between 1980-1988, it is estimated that a million people lost their lives and the death toll of the Second Congo war is, although disputed, said to be between 2.6 – 5.4 million.

Taking us through the 20th century history of the Israel – Palestine conflict, Gelvin navigated the audience with steady hand through the British assumption of control over Palestine and the Balfour declaration in 1917, to the 1948 declaration of Israel as a sovereign state, via the six-days war in 1967 to the 1993 Oslo accord. Even though this conflict is regularly seen as an age-old clash between Islam and Judaism, Gelvin means that the roots of the conflict is instead to be found in a much more modern battle between Jewish nationalism, often referred to as Zionism, and Palestine nationalism. Both of these have sprung out of resistance towards a threat, Zionism against European anti-Semitism during the 19th and 20th century and Palestinian nationalism as a response to Zionism. According to Gelvin, the conflict is first and foremost to see as a struggle over the ownership of territory, with both sides claiming ancestral rights to settle in the region. Furthermore, Gelvin argues that the fact that there has been so much foreign interference in the conflict has contributed to the difficulty of finding a solution.

The lecture concluded with Gelvin discussing some of the reasons for why the peace process that was instigated with the Oslo accord has stalled. The main explanations to this are that Israel has in general become more right wing, and that domestic support for the Israeli settlements on the West Bank has increased. The settlements are illegal according to international law, and the removal of them is one of the key points stipulated in the Oslo accord. Israel’s willingness to implement the plan for peace has also diminished after the violent Intifadas that has only served to further disgruntle Israelis.

After the lecture, there was time for the audience to ask questions. A topic that came up was how the U.S Middle Eastern policies have affected the aforementioned conflict. Gelvin stated that the current U.S administration has effectively renounced its status as an honest broker, and is now to been seen as supporting the Israeli cause. A quote that I will remember is the “the U.S right now seems to have a reversed Midas touch in the Middle East, everything we touch turn into… well, it does not turn into gold”. I leave it to the reader to interpret whether this is to be seen as an endorsement of the recent U.S policy decisions or not.

Upon leaving the lecture hall, I felt as if I had received a more nuanced picture of this, during my lifetime, ever-present conflict. Gelvin managed to cram in a lot of facts during roughly an hour without the lecture getting stale, his narrative light and quickly moving forward without giving the impression that important details were omitted. I found the part of putting the conflict into perspective particularly interesting. This is not to say that I believe that to much attention is given to this dispute, but rather that there might be conflicts and catastrophes in the world that should receive a lot more focus than they do right now. Coming from Sweden, I was also interested in hearing Gelvin’s opinion on the rather recent Swedish recognition of Palestine as a state. I managed to get a hold the lecturer himself shortly after the audience had left Mitchell Auditorium, and this cause of action was apparently one that was supported by the scholar. Following up with the question if whether he would recommend the U.S to take the same action, the action was a resounding yes. Whether or not this opinion will have an effect on the U.S policy is something that time will tell, but one thing is clear: maintaining status quo in the Israel – Palestine conflict will serve nothing but prolonging the suffering of both peoples.

The James Gelvin talk on The Roots of the Israeli-Palestinian
Dispute is available for viewing on line: video archive page: http://www.css.edu/about/peace-and-justice-lectures-archives.html
—
Please contact Professor Liang if you wish to write for The North Star Reports — HLIANG (at) css.edu

31 responses to “A Review: Professor James Gelvin – The Roots of the Israel – Palestine Dispute – by Hannes Stenström. The North Star Reports: Global Citizenship and Digital Literacy, at NorthStarReports.org and facebook.com/NorthStarReports”