Galway and Good Friday – by Victoria Hansen. The North Star Reports: Global Citizenship and Digital Literacy, at NorthStarReports.org and facebook.com/NorthStarReports

Galway and Good Friday – by Victoria Hansen. The North Star Reports: Global Citizenship and Digital Literacy, at NorthStarReports.org and facebook.com/NorthStarReports

It is no secret that Ireland is a very Catholic country. In fact, about 86% of the population is Catholic, so it should come as no surprise that they take the Easter Holiday very seriously. The Wednesday before Easter three friends and I traveled to the college town of Galway to spend our Easter Break. We figured that nothing would be open on Sunday because of Easter but we didn’t even consider what Good Friday would do to normal business hours of all the pubs that Galway is known for. 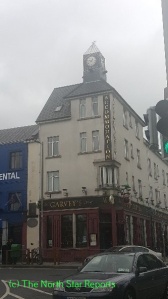 [The first stop on our pub crawl]

Wednesday had been a long travel day so I was tired and ended up having a relaxing night in the hostel. When Thursday morning came, I was ready to explore. Right when we began walking around Galway I noticed that it seemed different from when our entire study abroad group visited it back in February. It was still very busy but oddly quieter. It took me a long time to realize that the reason it was so quiet was because all of the university students had already headed home to begin their Easter breaks. The streets were packed with tourists from all over the world, not their usual student crowd.

At the end of the main street that goes through the shops of Galway, a food festival was being set up. I assume it was scheduled for that very same weekend to distract people from the fact that Good Friday meant no night life. After walking around all day, we headed back to our hostel to see if they had any planned events for the night. The reception desk had a sign encouraging people to join them on the free pub crawl that would take place at 9:30 PM. Since we had nothing else to do for the night, we all agreed that would be a fun time. 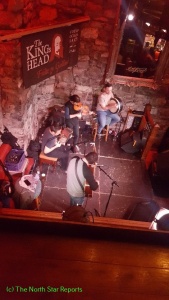 [The band at The Kings Head]

The pub crawl began in the lobby of our hostel. We were supposed to mix and mingle with the other guests setting out on this adventure with us. Two of my friends struck up a conversation with a Canadian from Vancouver but other than that, we mostly just talked to each other until it was finally time to set out to the first pub. By the time we left, it was already past ten o’clock. The first place we went to was called Garvey’s. They had a small band playing live music and apparently, an entire soccer team from Manchester happened to be there. After dancing along to the band for about forty-five minutes, we headed to a pub called the Kings Heads.

As we walked to the pub, I noticed the streets were oddly bare. It was only 11 O’clock but some of the pubs had already shut down for the night. When we got into the next pub, the leader of our group told us that in a half an hour the pub would stop selling alcohol. That seemed odd to us because we had never heard of a pub not serving any kind of drinks. Later we found out they do this because it is actually illegal to sell alcohol on Good Friday and Good Friday begins right when the clock strikes midnight. Our group made the mistake of leaving the Kings Heads to go to another popular pub down the street called The Quay’s. Even though there was still half an hour before Thursday became Friday, all the pubs were no longer letting people in. 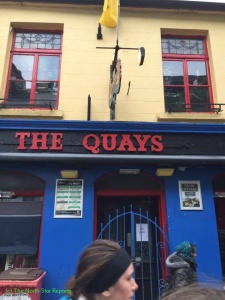 Defeated, we decided to head back to the hostel. We were walking down the street when an odd group of clearly intoxicated boys formed in the middle of the street. They lifted one of the boys up and he led the group in a traditional Irish drinking song. The rest of the group joined in when they knew the words but otherwise it was mostly just the boy crowd surfing singing. It was quite the sight to see.

The next morning when we walked through the town all the pubs were closed and pad locked behind their gates. The only pubs that were open only served food until a certain time in the evening and then they too had to close their gate. It was odd walking through a city that is known for all of its pubs and having all of those pubs closed down. It was clear that many of the tourist were disappointed by the closing of the pubs. They, like us, probably hadn’t even thought about the effect that Good Friday would have on their trip to Galway.

17 responses to “Galway and Good Friday – by Victoria Hansen. The North Star Reports: Global Citizenship and Digital Literacy, at NorthStarReports.org and facebook.com/NorthStarReports”