Amsterdam: A Place of History – by Victoria Hansen. The North Star Reports: Global Citizenship and Digital Literacy, at NorthStarReports.org and facebook.com/NorthStarReports

Amsterdam: A Place of History – by Victoria Hansen. The North Star Reports: Global Citizenship and Digital Literacy, at NorthStarReports.org and facebook.com/NorthStarReports

[A picture of the outside of Anne Frank’s house]

When I thought about the city of Amsterdam before visiting it, the first two things that came to mind were the many canals that flow through the city and its supposedly seedy red-light district. I didn’t even think about all the history that the city held, especially since it had been taken over by Nazi Germany during World War II. While on this trip, I saw the reality of what life was like during World War II through two of the museums that are found in Amsterdam: the Anne Frank House and the Dutch Resistance Museum.

Many people know of the book A Dairy of Anne Frank, written by a young girl during World War II but many people don’t realize that the Diary was written in the heart of Amsterdam. The city of Amsterdam is where she and her family hid for two years in a secret annex during the war. Today it is still set up just the way it was while they were in hiding and it has the added bonus of being home to the original Diary of Anne Frank. As you can imagine this site is extremely touristy, so to get in we had to stand in line for three whole hours. But the second you step through that hidden doorway behind the book shelf you are transported back in time, back to days when Nazi soldiers roamed the streets below and the families in hiding held their breath out of fear of being found out. Each room tells a different story of what life in hiding was like. From the shared bedrooms to the bathroom which couldn’t be used during the day in case someone down below was to hear the water running and realize that people were being hidden there.

Not far from the Anne Frank House there is another museum that is lesser known of called the Dutch Resistance Museum. The Dutch pride themselves on their open-minded values so when Germany invaded them in World War II they fought them every step of the way. From hiding many Jewish families to smuggling them out of the country, many Dutch citizens put their lives on the line to help out the families that need it. They also organized many protests which were carried out even when their safety was threatened. These protests were always deemed illegal and therefore punishable by law but they got around that by simply telling the police that they hadn’t participated in them. Although the Dutch resisted the Germans, they still felt as though they could have and should have done more to protect their Jewish citizens throughout the war and in 2010 the Dutch Government went as far as to formally apologize to all of its Jewish citizens for not protecting them better. 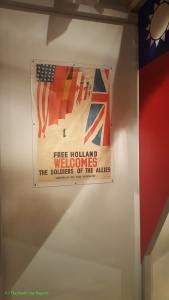 [One of the posters from the Dutch Resistance Museum]

Amsterdam has so many bright and cheerful places, from the palace of Amsterdam to the I Am Amsterdam that tourists flock to like birds but there is forever a dark spot left on that city. The Anne Frank House and the Dutch Resistance Museum serve as a reminder of the devastation of World War II on the people of the Netherlands. Both museums tell a story about World War II, but they tell the story in two very different ways. One museum tells the story through the eyes of a young Jewish girl and the other tells the story through the many voices of the Dutch citizens, both Jewish and non-Jewish, that lived through those dark years. Amsterdam doesn’t hide its history, it boasts it so that it is remembered.

[The sign above the Dutch Resistance Museum]
—
Please contact Professor Liang if you wish to write for The North Star Reports — HLIANG (at) css.edu

23 responses to “Amsterdam: A Place of History – by Victoria Hansen. The North Star Reports: Global Citizenship and Digital Literacy, at NorthStarReports.org and facebook.com/NorthStarReports”