World History and the Meaning of Being Human – Developing into a Dancer: My Own Foundation Myth – by Alexa Lee. The North Star Reports: Global Citizenship and Digital Literacy, at NorthStarReports.org and facebook.com/NorthStarReports

World History and the Meaning of Being Human – Developing into a Dancer: My Own Foundation Myth – by Alexa Lee. The North Star Reports: Global Citizenship and Digital Literacy, at NorthStarReports.org and facebook.com/NorthStarReports

My mom read to me all the time, but especially before bed, and I had a book about a ballerina that was my absolute favorite. She jokes that she had it memorized, and still does (even though neither of us remember the title, so I am not so sure about that). After she read this book one night, we kissed goodnight and I drifted off thinking about ballerinas. That night, I had a dream that I was a dancer – a tap dancer. There were flowers thrown on the stage, the lights were hot, people were cheering, and there was a tall blonde woman in front of me moving her feet and making noise with them. I knew I was supposed to mimic her steps, but I couldn’t move. It was actually a nightmare, and I was so scared I had an accident, both on the stage and in real life. I woke up crying, and my mom rushed into my room. When she saw what happened, she soaked my sheets in the laundry tub and I got to sleep with her that night.

The next morning, I asked her if I could join dance because I wanted to know how to make noise with my feet. It was the middle of the year so she thought it was unlikely, but perhaps they would let me. She brought me to Becky’s Dance Studio in Cloquet, Minnesota. We were told that there was no way I could be in recital, the dances were already started and costumes ordered, but I could be in the class anyways and not perform. My mom said that was fine, and I went to the class that day. My teacher was tall and blonde, and I told my mom it was the lady from my dream. She even stood right in front of me and would move her feet, telling us to copy her. That time, I did, and I did so well, I got to perform in the recital that May. To this day, before I perform, I think about that dream. If I did not have it or the accident, I probably would not have joined dance because then I would not have been facing my fears. I still think about four-year-old me, how far I have come, and how the urge that I might pee my pants before a performance in front of five or five hundred people never goes away, despite the fact that I have been doing it for seventeen years. 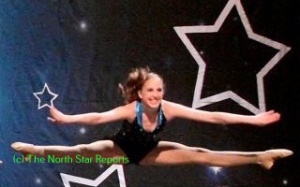 I think my foundation myth relates closely with the primary source “Becoming a Brahman Priest” in Tignor’s book. Satyakama asked his mother whose family he belonged to, and she did not know. He then asked Guatama Haridrumata if he could be a Brahman Priest, and when he answered honestly that he did not know what family he came from, Guatama Haridrumata exclaimed that only a true Brahman would “speak out” like that (149). I think this relates to my experience of becoming a dancer because I asked to be one like he asked to be a priest. We also were both questioned, but ultimately given the opportunity and in some way proved that we were worthy of the chance – him by speaking out, and me by being able to remember the steps.

Another founding myth in Tignor’s book was the Shang Dynasty’s. Its ruler, Tang, defeated the previous king and offered himself up to end the drought that was brought on when “the sun dimmed, frost and ice appeared in the summer, and a long drought followed heavy rainfall and flooding” (103). This is different from my story because it involves more people and the beginning of an entire empire, but it is also similar because it was a time of despair. Theirs was a little more intense, but both the Shang and I were looking for an answer to a problem that we came across, and creation myths are universal in this way.

The Amazon people in the documentary we watched had a surplus of rituals and creation stories. One story that I think aligns well with mine was about this rock that they believed was a spirit that would appear in human form during rituals. Although she was in human form in my dream and real life, my dance teacher appeared before I met her. Her appearance in my dream started my dance career, and she was more symbolic and spiritual than real. This relates to our class discussions about being mindful when hearing creation stories. It may seem ridiculous that I think I dreamed about my teacher before I met her, and so might the idea that a rock can turn into a human, but we both believe it and have rituals that surround it. My mom is the one who reminds me that I was meant to be a dancer because of my dream, and it bonds us. The Amazon people also shared their stories with their children to connect on a deeper level. Without founding myths, this kind of connection would be nearly impossible.

Founding myths are around us everywhere that we look, and they do have a universal purpose for humans. For one, they provide answers, but they also provide values and importance to one’s life. They are a way to preserve the memory of something that is very important to the individual, or to a mass amount of people, in an effort to see connections and have a sense of where they come from. Additionally, humans tend to read into things a lot more, so maybe the Shang were making something more of the drought, the Amazons were making something more out of a rock, and I was making something more out of a dream, but does it matter? It changed the course of our lives in one way or another, and that is what is important, not its probability or factuality. Our myths are true because they make us happy, they give us purpose, and we believe them. They are also fun to tell. To me, that is all that matters and all I need.

31 responses to “World History and the Meaning of Being Human – Developing into a Dancer: My Own Foundation Myth – by Alexa Lee. The North Star Reports: Global Citizenship and Digital Literacy, at NorthStarReports.org and facebook.com/NorthStarReports”