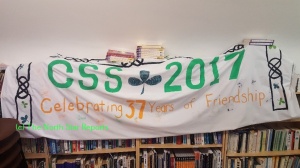 [The College of St. Scholastica banner made by us students]

It should have been no surprise to me that on the day of St. Patrick’s Day I woke up to downpouring rain. I was in Ireland after all. Here it seemed to rain almost daily but I thought that maybe, just maybe the sun would actually smile down on Ireland for its holiest of feast days and the massive celebrations that come along with it. But the fact that it was raining seemed to make the day more authentic. Rain also meant things were not going to go the way they initially had been planned.

The morning was supposed to start with a parade. The entire town had already been decked out with orange, green and white flags in preparation for the parade. One that the majority of the town would be participating in. I thought the idea was somewhat odd considering the fact that if everyone was in the parade no one would be watching it. Unfortunately, due to the weather I never got the chance to learn how the logistics of their parade actually worked. Many of us students were saddened by this news especially those who spent long hours working on the banister that was to be held up.

Instead of walking down the streets in the parade, we were informed that our Professor Richard Revoir’s youngest daughter Ava would be performing an Irish dance in front of the entire town. Wanting to support her, the majority of us students made our way to the town hall where the performance was set to begin at 12:30. In true Irish fashion the actual performance didn’t start for at least an hour after the set time but that was okay because it gave us a chance to check out the baked goods that were on sale. Unbeknown to us, the even we had just entered was a fundraiser for some kind of horse show that was set to take place much later in the year. 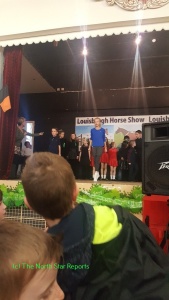 [Ava Revoir dancing with the other Irish students]

I grabbed a delicious chocolate and caramel bar before sitting in one of the few seats left open. At first I was surprised at how few people were there because usually the entire town would show up to this type of thing but almost as soon as I thought those words, huge crowds of people came in and filled the remaining gaps in the room. Quickly we went from having good seats to not even being able to see the stage. My friends Arden and I decided to move to the front where rows of chairs were just beginning to be set up to accommodate the crowd.

Not long after we moved the dancers finally made their way out to the stage. I was amazed by how fast they could move their legs and how easily they kept their arms straight down to their sides. It was a delightful surprise to see that there were at least four male dancers in the group. The kids had set groups that they danced with, each new group was ushered on stage and right back off when finished. In the end production Ava finally took the stage. Her father had boasted that she had only taken two lessons before the performance and it was clear as she danced that she was a very quick learner. At the end of the performance all of us Scholastica students jumped up and cheered for her like proud big brothers and sisters.

After all the excitement of the fundraiser, we had worked up an appetite for lunch. We decided to head back to the cottages for a quick lunch and then head right back into town to the pubs. Each pub that we walked into was packed full with people from the town. Most of them we had never even seen before, which is rare in such a small town. Taking in all the people we decided that it would be best to not stay in one place for too long.

Since we had started with the one closest to our cottages we decided we would just slowly make our way through the three other pubs in town. In the first pub, I was surprised to notice that unlike in the states, they did not dye their beer green. Then again, we put a lot of things in our foods and beverages that they no longer do. To add to the lively atmosphere of the first pub, they had free sandwiches to snack on and we all enjoyed one before moving on to its next-door neighbor: Joe MacNemara’s. 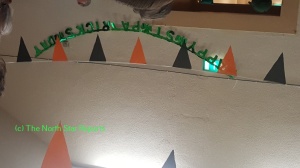 MacNemara’s was full to the brim with people our age, readying themselves for the DJ that was set to begin playing any minute. For most people, the time they spent in Louisburgh would really only be pregaming compared to the celebrations they would encounter in the nearby city of Westport. After an hour or so we grew bored with MacNemara’s and moved on to the DerryLahn. Instead of standing around at the bar like every other pub, we took this opportunity to grab dinner. Before heading to our final pub. When we peeked our head into the final pub we decided it was a bad idea considering every single person just stopped and stared at us. It was nearing ten o’clock at this point and many of us had very early trains to catch for spring break so we were okay heading back to the cottages.

St. Patty’s day had been a total success aside from the parade being canceled. It had been very exciting to see a much livelier side of the little town of Louisburgh. Especially considering the fact that seeing even one person our own age in the town never seemed to happen. It felt like it was a sneak peek into what we would see during the music festival at the end of April, when our itty-bitty town swelled to twice its population.
—
Please contact Professor Liang if you wish to write for The North Star Reports — HLIANG (at) css.edu

8 responses to “St. Patrick’s Day in Ireland – by Victoria Hansen. The North Star Reports: Global Citizenship and Digital Literacy, at NorthStarReports.org and facebook.com/NorthStarReports”