A Semester in Italy – Siena and San Gimignao – by Donovan Chock. The North Star Reports: Global Citizenship and Digital Literacy, at NorthStarReports.org and facebook.com/NorthStarReports

A Semester in Italy – Siena and San Gimignao – by Donovan Chock. The North Star Reports: Global Citizenship and Digital Literacy, at NorthStarReports.org and facebook.com/NorthStarReports

Ciao, This semester I am also studying in Italy with Sara Desrocher. The nature of my reports are to give readers an alternate perspective of the same program. I’m currently a senior at St. Scholastica studying computer science. I believe computers could play a significant role in environmental sustainability in the future. Many farmers in Minnesota are already using many forms of hardware and software for production like geographical information systems, global positioning systems, big data technology, etc. However, 16 credits is not the only reason why I came to Italy. On the weekends we are completely free and encouraged to travel so that’s what we do.

One day we took a trip to Sienna and San Gimignano, two very significant medieval cities. In Siena you’ll find The University of Siena for foreigners. It is also the university in which we’re enrolled (even though we’ve only been on campus once) and where one of our professors works. Our professor was giving us a tour of the city when we came across another student from the school repeatedly giving a public service announcement: “Chicchirichì!” which translates to “Cock a doodle doo.” Apparently fraternity hazing is perfectly acceptable here and an hour of that was his initiation. Another hour later, we became brothers.

Apart from its medieval architecture and cultural integrity, Siena is known for its horse racing. They hold two horse races a year around the edge of the Piazza. They say it gets intense and people die every year. The piazza/race track is roughly the size of 1.5 soccer fields so you can imagine how tight it gets in there. The name of the tower is “Torre del Mangia” and stand in the Piazza del Campo. The tower was once one of the tallest secular towers in Italy and built to be exactly the same height as the Siena Cathedral as a way of saying that the church and state were equal. 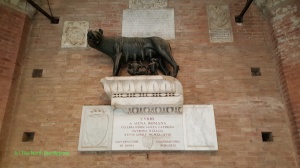 Inside of the tower is also a famous monument of Romulus and Remus – an interesting myth about Rome’s founders. The twin boys’ father, Numitor, was king of Alba Longa until his brother, Amulius, killed him, seized power and abandoned the twin boys to die. The twins were later found by a female wolf that suckled them and kept them alive. When the twins grew up, they killed Amulius and restored Numitor’s name to the throne. After they gained power, they got in a dispute about where to build Rome. Romulus killed his brother Remus and then build Rome on Palatine Hill.

Later that day we went to San Gimignano which was like the Manhattan of Italy in Medieval times due to all of the tall towers. Rich families gathered there and built towers. The taller your tower was, the higher status your name was. They also have Gelateria Dondali which is globally ranked as one of the best gelato shops. I can’t quite remember the flavors but I think they were saffron, chocolate, and another original of the shop. As an ice cream fan, I think I would have to agree; it was some of the best gelato in the world. Aloha!
—
Please contact Professor Liang if you wish to write for The North Star Reports — HLIANG (at) css.edu

12 responses to “A Semester in Italy – Siena and San Gimignao – by Donovan Chock. The North Star Reports: Global Citizenship and Digital Literacy, at NorthStarReports.org and facebook.com/NorthStarReports”