I work with another organization that pairs individuals that are studying or working throughout the world with elementary school classes in the United States. I signed up for the program because I loved the idea; I could help educate a class of young students about another country, discussing topics like stereotypes, culture, and addressing differences between people and countries.

For my first article that I had to write about the program, we were asked to describe the place that we were living. There were prompts–weather, currency, prices, and nature found throughout the city–and then there were more open-ended questions that we were allowed to answer as we pleased based on what seemed important to us. For one of them, I chose to discuss the fact that I had discovered I was having extreme allergic reactions to the pollution in Bogota. It allowed me to talk about the recent push to replace the Transmilenio buses with new “eco-friendly” or electric buses and the fact that, though called “eco-friendly”, many of the buses continued to contribute to pollution. 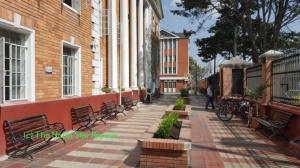 (The university where I work.)

This seemed very commonplace to me. I was discussing the fact that a city in another country struggled with pollution, a problem that many large cities around the world

When my editor sent me revision notes, I was a bit bothered by the fact that she had chosen to remove the entire section of my article that talked about pollution in Bogota. She explained that my paragraph about pollution was too negative. I should just focus on the different eco-friendly movements and I shouldn’t focus at all on the pollution. In her words, I was going to make the young students “prejudiced” against Bogota if I portrayed it in a negative light.

Here’s my issue with that: Even though they may be young, elementary students aren’t incapable of critical thinking.

Critical thinking may be a difficult skill to develop, but that doesn’t mean that it should be avoided. Rather, it should be focused on. The United States education system definitely has its faults, but one thing that I loved about all the classrooms that I’ve worked in is that the environment of education stressed the importance of critical thinking and independent thought processing.

(The office that I’m allowed to use at work is shared by seven other professors.)

I didn’t want to give the students that I had been paired with a “dumbed down” portrayal of another country. Yes, it is true that in the past (and the present) the United States as a country have been prone to broadcasting the idea of the United States as ultimately “good” and other countries as “lacking” or “bad”, but that doesn’t mean that in order to make up for this incorrect portrayal of the world that we should swing the pendulum to the complete opposite. The organization that I was working with was asking me to portray everything about other countries as incorruptibly “good”.

A friend of mine taught me a phrase that she used when working with elementary students in an exchange program that brought students back and forth across the US-Mexico border. “It’s not bad, it’s just different”.

After living in various countries throughout her life, my friend shared the amended version that she had created from that phrase she was told to use in her job. “Just because it’s different, doesn’t mean it’s bad.”

Sometimes things that are “different” are bad–an idea that in itself seems a bit negative because it’s only talking about negatives. What’s important to take out if is that the cultures of ALL countries have positives and negatives. Looking at entire countries with a dichotomy of black and white, good and bad, is like trying to use the phrase “It’s not bad, it’s just different” because it doesn’t allow for instances when certain norms– sexism, racism, etc.– are different and also not particularly desirable.

To me, being asked to show students an overly positive picture of living in Bogota that stripped away all things even slightly negative was both incorrect and inefficient. In trying to correct the fact that for so long the United States has created a dichotomy of good and bad and placed itself in the good category, the organization was asking me to create another dichotomy of good and bad and place anything that was “different” in the good category. While it was an attempt to fix a stereotype that many people believe, in the end I was still presenting the students with a dichotomy instead of an opportunity to critically examine differences and understand WHY, in many cases, that things that are different are not always bad.

About our special correspondent and senior editor Laura Blasena: Ever since I was a little Kindergartner I’ve always wanted to be a teacher.

I graduated from St. Scholastica in the summer of 2015 with a double major in Elementary Education and Spanish Education after student teaching as a 5th grade teacher and also as a Spanish teacher at NorthStar in Duluth, Minnesota.

While my future plans before graduation were initially to become a classroom teacher, I decided to wait a year to begin teaching in the United States and have chosen to work as a Fulbright English Teaching Assistant in Bogota, Colombia. In Colombia, I will be working with a university as an assistant in the language department, attending classes, running conversation clubs, and offering the perspective of a native speaker.

I’ve always loved to travel. In college, I participated in several study abroad trips, visiting England, Guatemala, and Mexico. (I loved visiting Mexico so much that I even went back a second time!). I’m looking forward to the travel opportunities that I will have while working and living in Colombia.
—
Please contact Professor Liang if you wish to write for The North Star Reports — HLIANG (at) css.edu

See also, our Facebook page with curated news articles at http://www.facebook.com/NorthStarReports
–
The North Star Reports: Global Citizenship and Digital Literacy (http://NorthStarReports.org) is a student edited and student authored open access publication centered around the themes of global and historical connections. Our abiding philosophy is that those of us who are fortunate enough to receive an education and to travel our planet are ethically bound to share our knowledge with those who cannot afford to do so. Therefore, creating virtual and actual communities of learning between college and K-12 classes are integral to our mission. In five semesters we have published 200 articles covering all habitable continents and a variety of topics ranging from history and politics, food and popular culture, to global inequities to complex identities. These articles are read by K-12 and college students. Our student editors and writers come from all parts of the campus, from Nursing to Biology, Physical Therapy to Business, and remarkably, many of our student editors and writers have long graduated from college. We also have writers and editors from other colleges and universities. In addition to our main site, we also curate a Facebook page dedicated to annotated news articles selected by our student editors (http://www.facebook.com/NorthStarReports). This is done by an all volunteer staff. We have a frugal cash budget, and we donate much of our time and talent to this project. We are sponsored by St. Scholastica’s Department of History and Politics and by the scholarly Middle Ground Journal: World History and Global Studies (http://theMiddleGroundJournal.org).

For a brief summary, please see the American Historical Association’s Perspectives on History, at: http://www.historians.org/perspectives/issues/2013/1305/Opening-The-Middle-Ground-Journal.cfm

(c) 2012-present The North Star Reports: Global Citizenship and Digital Literacy http://NorthStarReports.org ISSN: 2377-908X The NSR is sponsored and published by Professor Hong-Ming Liang, NSR Student Editors and Writers, The Department of History and Politics of The College of St. Scholastica, and the scholarly Middle Ground Journal. See Masthead for our not-for-profit educational open- access policy. K-12 teachers, if you are using these reports for your classes, please contact editor-in-chief Professor Liang at HLIANG (at) css.edu

46 responses to “A Fulbright Teacher in Bogota, Colombia, A Special Series – “It’s Not Bad, It’s Just Different …” – by Laura Blasena. The North Star Reports: Global Citizenship and Digital Literacy, at NorthStarReports.org and facebook.com/NorthStarReports”