Sister Cities of Duluth, Minnesota, Home of NSR — The North Star Reports – by Marin Ekstrom. Sponsored by The College of St. Scholastica and The Middle Ground Journal

Sister Cities of Duluth, Minnesota, Home of NSR — The North Star Reports – by Marin Ekstrom. Sponsored by The College of St. Scholastica and The Middle Ground Journal

Everyone has a connection to a certain city or community. Whether people have strong hometown roots or live a bit more nomadically, they often find some way to develop a sense of home and/or strong familiarity based on place. Furthermore, some people may feel deeply associated with a city or town that they do not reside in due to family and friend connections, vacations, media, etc. —even if they have not even visited it before! This sense of both individual identity and sense of community based on location fuels the mission of sister cities across the world. Sister cities strive to make global connections while cultivating their own sense of uniqueness, which fosters warmer international relations on a grassroots level while making the home community a more vibrant place that is more attractive to both locals and visitors.

First and foremost: what exactly is a sister city? According to the official website of Sister Cities International, it is defined as “a broad-based, long-term partnership between two communities in two countries.” Although the concept has centuries’ worth of precedents, the modern-day version (at least in terms of creating the official Sister Cities International organization) was officially established in 1956 by then-U.S. President Dwight D. Eisenhower. He believed in the power of citizen diplomacy, a concept that advocates for everyday people to forge bonds with other communities throughout the world. By forming these relations, Eisenhower “ reasoned that people of different cultures could celebrate and appreciate their differences and build partnerships that would lessen the chance of new conflicts”, as quoted from the “Mission and History” section of Sister Cities International’s website. This mentality had particularly poignant relevance given its historical context, as the prejudice and devastation of World War II was still fresh on people’s mind. The earliest sister city relationships particularly focused on Germany/ Western Europe and Japan, as they offered a means to establish human connections with the so-called (former) “enemy.” In turn, developing these friendships would work to heal the scars and take preventative measures from falling into such atrocious wars and human catastrophes again. Throughout the years, Sister Cities International has continued to evolve into a vibrant, groundbreaking organization that promotes the establishment of international ties based on student exchanges, professorial interactions, economic development, humanitarian interests, etc.— the sky is truly the limit.

Our hometown community of Duluth, Minnesota, USA has the wonderful fortune of having a truly outstanding and internationally respected sister cities organization. Duluth Sister Cities International (DSCI) has been officially operating since 1986 (though it established its first sister relationship in 1980) and today has five sister cities consisting of Thunder Bay, Canada; Petrozavodsk, Russia; Växjö, Sweden; Ohara-Isumi City, Japan; and Rania, Iraqi Kurdistan. Each sister city relationship is characterized by their intriguing historical back-stories and wide array of projects and exchanges that they pursue. For example, there have been legal and human rights committees associated with Thunder Bay, social work and public health delegations with Petrozavodsk, choir concerts with Växjö, a middle school student exchange with Ohara-Isumi City, and planting a tulip garden in honor of Rania. DSCI also engages in annual concerts, dinners, holiday tree displays, and other festivities to perpetually draw attention to the organization’s work. DSCI has allowed our city to make deep bonds of friendship with Canadian, Russian, Swedish, Japanese, and Kurdish compatriots and in turn has enriched our own home community in the process. Perhaps DSCI says it best with the following quote on its website:

“Once you understand how we’re different, you see how we’re the same. True understanding between people and nations begins with individual involvement…

We [Duluth and the world] have greater opportunities than ever for global understanding, because Duluth Sister Cities International helps bridge the oceans by bringing many of the world’s traditions, cultures and languages right to us, and by taking us to their countries.”

Sister Cities International has paved the way for championing ground level “citizen diplomacy,” with Duluth being an exceptionally successful offshoot of this organization. Both Duluthians and our counterparts abroad have grown and bettered from the wonderful work of DSCI, making it a truly marvelous asset to our community and beyond. 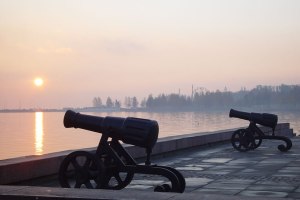 23 responses to “Sister Cities of Duluth, Minnesota, Home of NSR — The North Star Reports – by Marin Ekstrom. Sponsored by The College of St. Scholastica and The Middle Ground Journal”