Oslo, Norway – I’m a Glutton, but I’m also Frugal, Food and Norway – The North Star Reports – by Jonia Gordon. Sponsored by The College of St. Scholastica and The Middle Ground Journal

Oslo, Norway – I’m a Glutton, but I’m also Frugal, Food and Norway – The North Star Reports – by Jonia Gordon. Sponsored by The College of St. Scholastica and The Middle Ground Journal

Editor’s Note: this is a part of a special series from Jonia Gordon, a talented student who is studying in Oslo, Norway for the Fall 2015 semester. Jonia is a thoughtful writer, as well as a talented artist. The illustrations that accompany this article are also by Jonia.

Author’s Note: The exchange rate of the US dollar to the Norwegian Kroner is fairly high currently: $1 is roughly 8.1-. The exchange rate changes based on the strength of the currency. If you have specific questions about food, grocery shopping, etc. – feel free to ask.

Coming to Norway, I didn’t know what to expect for food. The stereotypical image of various fish-centred meals came to mind—which was honestly worrying as I do not like fish—along with the infamous lefse. However, that menu has not been a particular reality for myself. Yes, there are many fish options but, there are also many other meat options as well. Yes, there is lefse—which I tend to live off of—though it’s called ‘lompa’ here.

One thing to note about Oslo: it’s expensive to live in. I had researched a bit and talked to a friend who had attended the program the past year, previous to coming, and that prepped me with some knowledge. The problem is that my knowledge was purely abstract and experiencing the expensive prices first-hand is painful for a frugal (read: cheap) person like me. Luckily, my stipend is a respectable amount. I receive roughly 600.- (roughly $70) per week to buy groceries and other necessities.

There is one place I would highly recommend going to buy groceries (in particular: produce) if you are ever staying in Oslo for a prolonged amount of time: Grønland. It is located in eastern Oslo and offers fresh produce at cheap prices. It’s often swarming with people and if you go during a busy time (e.g. Saturday afternoons), expect to wait in the checkout line for a minimum of 20 minutes. Grønland is traditionally an area that immigrants have lived in and I believe that plays a large part in why the prices are so much lower – the businesses (the grocery and other establishments) cater to the community. On the other hand, the area is becoming more popular and trendy with the youth of Norway and that is playing an influence on how things operate there. It would be interesting to come back in five years and see how it has changed. 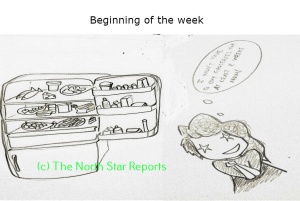 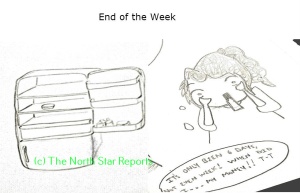 (Illustration Note 1,2: Exaggeration of fridge-space. I have 5 flatmates in which we share 2 fridges (1 shelf each) and cupboard space (1 cupboard each). If my fridge was this full and it was empty within a week; I would sob.)

Here are a few experiences I’ve had with food since arriving in Oslo:
A traditional fall (høst) food called “Fårikål” was a trip for my mouth and tastebuds. I had it at my volunteer placement with a bunch Norwegians telling me the background of the food and watching me as I tried it (no pressure…). First off, this seasonal food is boiled cabbage and lamb with some light spices. Secondly, it’s a prime time to eat the meat due to the sheeps feeding on herbs that provide the essence when eaten. At any other time of the year, the service users told me, it would not taste the same as the feed of the sheep would be different. Lastly, I quite enjoyed this “Norwegian” food; however, those who have problems with texture, the meat is slightly gummy/chewy. We finished the day off with waffles topped with sour cream and strawberry jam (jordbær) or brown cheese (brunost).

I have discovered an obsession within Norway and it is called Kebab. It’s an option that I tend to eat once of every two-or-so weeks; why? It’s delicious, it’s decently priced (55.- or ~$6.50), and establishments are located throughout Oslo—even on the outskirts of campus. It’s become a go-to meal when you want to walk around Oslo with friends and don’t want to spend a lot on food. For those who don’t know what kebab is: pita bread stuffed with lamb and an assortment of vegetables (cucumbers, corn, lettuce, tomatoes, etc.) topped off with dressing/sauce.

(Illustration Note, 3,4,5 : these exist in the U.S. and I must find them. I come from too small of a town that these are not common within a 3 hour drive. I’ll feed the love while I’m here and by the time I get home the craving will end. We all know that my last statement was a lie.)

If you’re a junk food lover, then you must be willing to pay the price. I’ve avoided it for the most part—great for my health and horrible for my desire to eat—and only splurge for certain occasions. I’ll often buy when I’m having a movie night with friends. Story time: One night, my friend and I had decided to watch a film together. We headed down to REMA 1000—a store located within our student village—and decided to buy junk food. All day I had talked about how I was determined to buy ice cream. As I looked through the ice cream freezer and decided on a chocolate-coated pistachio ice cream bar, my friend came around the corner and burst my sugar-coated bubble: (Illustration 6) 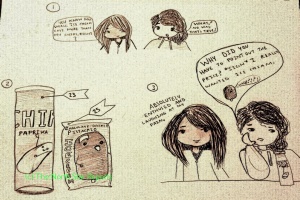 In the end, I bought the chips rather than the ice cream. I was disappointed and proceeded to eat the whole container of chips within a timeframe of 24 hours. I have come to learn that I have a much stronger will power to not spend money than to gorge on junk food: I never thought that to be a possibility before coming to Norway. At the same time, I have been able to decide when it’s best to splurge on something as a reward for doing well on papers, homework, or Norwegian class.

I have a confession: before coming to Norway, my cooking skills were… alright. I could make very basic food and primarily survived off of sandwiches, premade items, and my mother’s cooking (bless her soul). Since coming to Norway, I’ve started to learn how to cook and explore with trying different recipes and techniques. One of my greatest accomplishments is cleaning and cutting up chicken—I had no inkling beforehand that it would be as bloody as it was. On weekends, my friend (the same one who ruined my ice cream craving) and I cook together. She is very proficient and has taught me quite a bit; in exchange, I share my baking knowledge.

(Illustration Note 7: These pictures are a combination of homemade food, store bought foods, and a flatmate cultural feast + doodles for dramatic effect)
I’m not going to lie: there are times where I resort to eating food that I don’t have to cook or prepare. I think we all have those days where we just want to be lazy and not put any true effort in to making delicious food. For me, this day often falls on Sundays. In Norway, stores (food and other sorts) are not open on Sundays—an exception being Grønland and expensive shops. I probably spend more time daydreaming about food that I want to eat but (1) can’t afford and/or (2) can’t have as it doesn’t exist here (e.g. hotdish).

The main message I give to those future travelers to Norway (and anywhere in the world): you can survive and find fairly priced food here, it’s okay to splurge every once in a while, and trying new things can be fun. Maybe I’ll listen to my own message and try to eat fish or I can always fall into the “Do as I say, not as I do” life lesson. We’ll see how that goes, for now: off to eat a lazy meal (as shown below).

46 responses to “Oslo, Norway – I’m a Glutton, but I’m also Frugal, Food and Norway – The North Star Reports – by Jonia Gordon. Sponsored by The College of St. Scholastica and The Middle Ground Journal”