Home Life in Toledo, Spain — The North Star Reports – by Charles Bray. Sponsored by The College of St. Scholastica and The Middle Ground Journal

Home Life in Toledo, Spain — The North Star Reports – by Charles Bray. Sponsored by The College of St. Scholastica and The Middle Ground Journal

[Photo: 106 degrees Fahrenheit: just a slightly above-average temperature in the heart of Spain]

Typical Spanish home life is not so different from what most of us are familiar with; many Spaniards nowadays follow the nuclear family model, keep cats and dogs as pets, and eat a diet composed of the same basic elements that we find on our own plates. But as I realized over the summer I spent living in Toledo and travelling to many other parts of Spain, there are certain distinctions that take some getting used to.

The difference that struck me immediately was the meal schedule. Breakfast is nothing alarming, eaten at whatever time one gets up to start the day. A little more uncomfortable for the average American is lunchtime, eaten at 2, 3, or even later. I learned to sustain myself with snacks until then, scrounging for leftovers in my family’s fridge and buying bocadillos or fresh fruit from a café or marketplace. Finally, dinner can be served anytime from 9 to past 11. For my family, the norm was to start mealtime preparations around 9:15 and hope to begin eating by 9:45. However strange this arrangement seems, it makes sense when one considers the Spanish practice of the siesta and the sweltering climate that makes it necessary; as outside temps soar in the afternoon, no one cares to do much of anything except sleep for one or two hours after lunch. When it reaches 108 degrees outside, you’d best be unconscious, trust me. As a result, dinner is eaten later when people—and their stomachs—are feeling a bit more active. 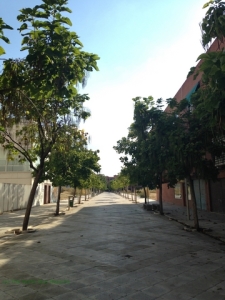 [Photo: The sun beats down, and the streets empty. Is it three o’clock already?]

Another aspect of Spanish family life, which alarmed me at first, was the relationship I had with my host mom, and the general reduction of personal space. The average Spanish mother has few boundaries in her own household, as I quickly discovered after I came home one day to find my room cleaned and arranged for me. She had touched my things, and moved them all around! Outrage! But then again, in Toledo my room’s motherly touch was more of an expectation than any sort of violation. Privacy, and especially the thought of personal space, is not as highly regarded in the Spanish culture as it is in our own. This convention can be observed in casual conversation—a practice accompanied by plenty of touching of one’s conversation partner on the elbows, shoulders, or maybe even a few pokes in the chest when harsh words are exchanged—as well as salutations, which can include a side-peck on each cheek when saying hi or goodbye. Interacting with my family members in a comfortable home setting helped normalize this kind of close-quarters communication that I would deal with throughout my time in Spain. 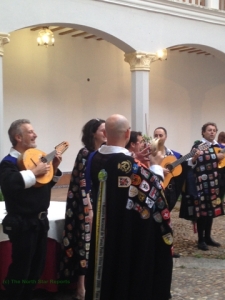 [Photo: Entertainment by a local traditional band was my first experience with the up-close-and-personal Spanish way of interacting. The band members were hardly shy, approaching students and handing them their robes and instruments to join in the music!]

Another part of living in a Spanish home that I saw first-hand was how close-knit my family was. Although the norm of one’s extended family inhabiting the same household has begun to fade as Spain has seen more and more international influence, time spent with family and friends remains an important focus of the Spanish lifestyle. I ate lunch and dinner almost exclusively at my house; even my host sister, at a very independent 24 years old, would rarely let other plans interfere with her attendance of family meals. At times I felt like I was intruding on the home of my host family, but I’ve come to realize that this impression was due to the fact that its members were so close, and so in-sync, that it was easy to feel like an outsider. Friends and family are of the utmost importance in Spain, and there, to not maintain close ties to loved ones is somewhat of a personal failure.

To a certain extent, any home outside of one’s own will seem a little strange. Moreover, moving in to a household in which even many basic assumptions differ can be an additional transition. It was no different in the case of my summer in Toledo, Spain, an experience that was surprising and intriguing in equal measure, and left me with a more complete picture of how Spaniards think and feel, interact, and live as a family. 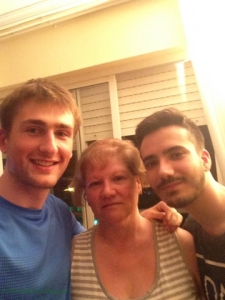 [Photo: Me, my host brother, and my host mother in Toledo, Spain.]

Charles Bray is a student at the University of Minnesota – Twin Cities. Charles kept a travel blog at: http://www.chuckstrip.wordpress.com
—
Please contact Professor Liang if you wish to write for The North Star Reports — HLIANG (at) css.edu

20 responses to “Home Life in Toledo, Spain — The North Star Reports – by Charles Bray. Sponsored by The College of St. Scholastica and The Middle Ground Journal”