Nicosia- The Last Divided Capital — The North Star Reports – by Karn Pederstuen. Sponsored by The College of St. Scholastica and The Middle Ground Journal

Nicosia- The Last Divided Capital — The North Star Reports – by Karn Pederstuen. Sponsored by The College of St. Scholastica and The Middle Ground Journal

This summer I had the opportunity to study abroad in Cyprus. For those who haven’t heard of this country, here are a few facts. Cyprus is the third largest island in the Mediterranean, has over 300 days of sunshine a year, and holds a rich cultural history. Although the majority of the island celebrates its Greek heritage, the northern section of the island has Turkish roots. During the majority of my two months in Cyprus, I stayed in the capital, Nicosia. Nicosia is the only divided capital city in the world. It is where those with Greek heritage and those with Turkish heritage are divided due to the Turkish invasion of 1974.

[Above is a picture of the border between the North and the South including a booth with the United Nations flag. The booth is to be manned by the UN at all times.]
When I made the decision to study there, I did some research on the border called the Green Line that separates the country of Cyprus. I also read about the Turkish invasion, but it wasn’t until I actually got to Cyprus that I learned in depth about the invasion and its impact. At the beginning of my Cyprus trip, I took a tour of what was called the old city (the older and more historic area of Nicosia). During that tour, our guide told us about the invasion. The Turkish army invaded Cyprus causing many to lose their lives and northern Cypriots to flee to the south, abandoning their homes and all of their possessions. After the invasion, a border was put in place to separate the North and the South. It remained closed for some forty years until reopening in 2003. 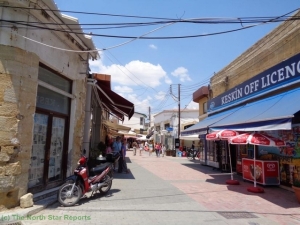 [The above picture is the Northern side of Cyprus taken just after crossing the line.]

During the tour of the old city, I had the opportunity to see the border of the Green Line as well as the United Nations buffer zone that separates Cyprus from the Turkish occupied area. Also in the old city is a border crossing zone where one can cross from Cyprus over to the Turkish side of the island. Although Turkey considers its position in Cyprus to be legitimate, the rest of the world considers it an illegal occupation. Therefore, when crossing over, one enters an illegal area. In this occupied area the laws of Cyprus and the help of the US embassy do not apply. Although the thought of entering this occupied area may seem a bit unnerving, I had the chance to cross over many times while in Cyprus.

[We got to enter this Turkish mosque located in the Northern side of Nicosia.]

The first time a group of friends and I crossed the line we were all a bit unsure of what to expect. After all, it’s not every day that one passes through a United Nations buffer zone to enter an area illegally occupied by the Turkish army. We entered the North at the Ledra street crossing where we showed our passports on the Southern side, walked a few yards through the buffer zone, and then had our passports scanned again by the Northern officers. After learning about the invasion and being warned about even taking pictures in the military area, I was surprised by how relaxed the crossing was. The Turkish officers were very friendly and were even joking with us as we checked in and out. Once we successfully crossed the Green Line, we got to enjoy the best of both worlds so to speak. On the Turkish side of the island, we found great food, souvenirs, and sites. The North also uses Turkish Lira instead of the Euro, so purchases were less expensive. Although most of my summer was spent in Cyprus, crossing the Green Line gave me the benefit of taking a trip to “Turkey” in a few short minutes.
—
Please contact Professor Liang if you wish to write for The North Star Reports — HLIANG (at) css.edu

The North Star Reports publishes edited essays from our students, particularly from those who are currently stationed, or will soon be stationed abroad. Students have reported from Mongolia, Southern China, Shanghai, Norway, northeastern China, Micronesia, The Netherlands, Tanzania, Ireland, England, Finland, Russia, and Haiti. We also have students developing reviews of books, documentaries, and films, and analysis of current events from around the world. We will post their dispatches, and report on their interactions with the North Star Reports students and teachers. We thank The Department of History and Politics and the School of Arts and Letters of The College of St. Scholastica for their generous financial support for The North Star Reports and The Middle Ground Journal.

21 responses to “Nicosia- The Last Divided Capital — The North Star Reports – by Karn Pederstuen. Sponsored by The College of St. Scholastica and The Middle Ground Journal”