Carnaval, Barcelona, Spain – — The North Star Reports – by Katherine LaFleur. Sponsored by The College of St. Scholastica and The Middle Ground Journal

A special series. Carnaval, Barcelona, Spain – — The North Star Reports – by Katherine LaFleur. Sponsored by The College of St. Scholastica and The Middle Ground Journal

[Carnaval in Barcelona is a smaller event, with parades and activities for families but less of the party atmosphere. The themed color was orange, as you can see from the confetti decorating the square.]

While there is no set religion in Spain, Roman Catholicism has prevailed as the most practiced across the country despite increasing immigration and a certain apathy in the younger generations in the last few years. As Lent approaches and we head into the Easter season, one tradition practiced in many Catholic cultures is Carnaval, a party for all that starts the week before Ash Wednesday and ends with a bang on “Fat Tuesday”. In the United States we have a similar fair-style celebration, Mardi Gras, and I have fond memories of the festivities held annually at the Catholic school I attended as a girl.

The highlights of my juvenile experience were a series of games spread throughout the school; a cakewalk, and if I was really crazy- spray painting my hair in one of the side stairwells. My mom would take me around 6:00pm and we’d be home no later than 9:30. This though, was something altogether different. 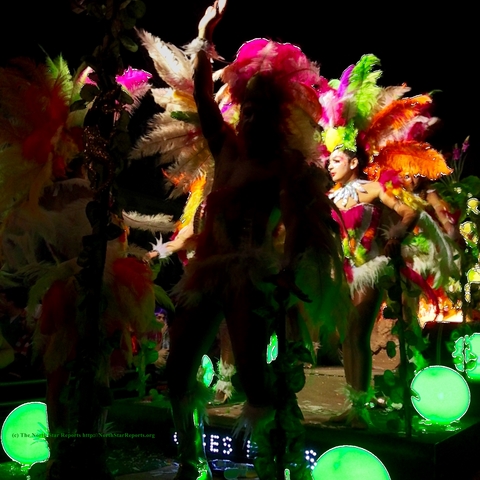 [Costumes for Carnaval are big and colorful, feathers and glitter are everywhere.]

Carnaval in Barcelona is tame compared to places like Brazil, so in order to get the “full experience” my roommates and I with some friends from school made the decision to venture to Sitges, a coastal city about 30 miles south of Barcelona on Fat Tuesday, the final night of celebrations and rumored to be the biggest and best example of Carnaval.

Costumes are customary, ranging anywhere from tame (such as my roommate Zoe’s striped shirt and captain’s hat) to ridiculous- anything goes. We took a late train (10:30pm) from Barcelona and it was full of fellow Carnaval-goers. Getting to Sitges a little after 11:20pm, we exited the station and were herded down a main street, following the sound of music and the hoards of people to a spot where we could watch the festivities.

[Comparsas are groups like this, dancers dressed in similar costumes who parade down the route together, most have separate themes and some of our favorites were football, Batman and unicorns!]

Situated against a fence along the parade route we got comfortable and enjoyed the spectacle that unfolded before us. Music, loud and varying from American to Spanish pop blasted from every float that passed us, and the comparsas (groups of people all dressed in a certain theme and dancing together) seemed almost endless.

Alas, the parade did end and so we ventured further into the chaos, passing through bars and clubs until we hit the beach. At this point it was nearly 3:00am Wednesday, and to say the least we were all beat. As a group we decided we’d had our fill and began trekking back up to the station to catch one of the rotating trains heading back to Barcelona. The ride back was a bit quieter than the one heading to Sitges, as everyone was pretty pooped, but I perked up when I realized one of our fellow train riders was wearing a Green bay packers hat. I jokingly chided him in Spanish, asking why in the world he had that particular hat and he responded saying he liked the team! He was an Argentinian boy living in Barcelona playing football and going to school.

At this point I was intrigued and we began talking about football- which of course got more people involved as many Americans were riding with us and my roommate goes to Ohio State back in the states which is a conversation point in and of itself!

The time passed quickly and suddenly we were told to get off the train a few stops before we anticipated. It was 4:00am and we just wanted to be home, so instead of waiting in the metro station for an hour until it opened at 5 we all splurged on a taxi to get us closer to home. By 4:30 I was thankfully tucked in and although not altogether excited to wake up in four hours for class at 8:30 I was, and still am, thankful for having experienced Carnaval. 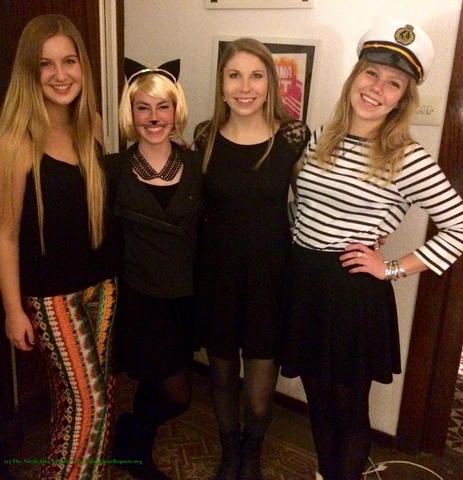 [While costumes are encouraged for Carnaval, they aren’t mandatory. My roommates and I took a group photo before heading to Sitges with more friends and you can see the variation in attire. (Photo credit: Meagan Loggins)]
—
Please contact Professor Liang if you wish to write for The North Star Reports — HLIANG (at) css.edu

See also, our Facebook page with curated news articles at http://www.facebook.com/NorthStarReports
–
The North Star Reports: Global Citizenship and Digital Literacy, The Middle Ground Journal and The College of St. Scholastica’s collaborative outreach program with K-12 classes around the world. We acknowledge North Star Academy of Duluth, Minnesota as our inaugural partner school, and the flagship of our program. We also welcome Duluth East High School and other schools around the world. The North Star Reports has flourished since 2012. For a brief summary, please see the American Historical Association’s Perspectives on History, at:

The North Star Reports publishes edited essays from our students, particularly from those who are currently stationed, or will soon be stationed abroad. Students have reported from Mongolia, Southern China, Shanghai, northeastern China, The Netherlands, Tanzania, Ireland, England, Finland, Russia, and Haiti. We also have students developing reviews of books, documentaries, and films, projects on historical memory, the price individuals pay during tragic global conflicts, and analysis of current events from around the world. We will post their dispatches, and report on their interactions with the North Star Reports students and teachers.

We thank The Department of History and Politics for its generous financial support for The North Star Reports and The Middle Ground Journal.

(c) 2012-present The North Star Reports: Global Citizenship and Digital Literacy http://NorthStarReports.org The NSR is sponsored by The Middle Ground Journal and The College of St. Scholastica. See Masthead for our not-for-profit educational open- access policy. K-12 teachers, if you are using these reports for your classes, please contact chief editor Professor Liang at HLIANG (at) css.edu

28 responses to “Carnaval, Barcelona, Spain – — The North Star Reports – by Katherine LaFleur. Sponsored by The College of St. Scholastica and The Middle Ground Journal”