Food and Rituals – Thanksgiving (US) — The North Star Reports – by Allison Brennhofer. Sponsored by The College of St. Scholastica and The Middle Ground Journal

Food and Rituals – Thanksgiving (US) — The North Star Reports – by Allison Brennhofer. Sponsored by The College of St. Scholastica and The Middle Ground Journal 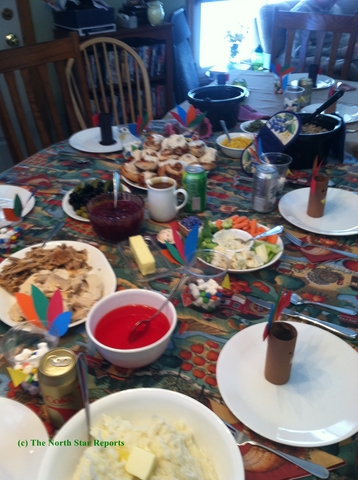 Thanksgiving with my family was a little different this year. Instead of being held at my grandparent’s house, we had it at my house, which involved us cooking the turkey. Or rather, us putting my grandma on speakerphone while she coached us through the process. Despite the new surroundings for our holiday, we still had the same traditions. Football is huge for my family and I play along the best that I can. We make a ten-by-ten grid on a piece of paper and make boxes out of the grid. Along one axis is one team’s name, and along the other is the competing team. For the life of me I couldn’t tell you who the teams were. Numbers from one to ten are randomly assigned to each box, both down and across the paper. Everyone purchases squares for ten cents each, the usual amount being ten. Then, at each quarter of the game, we check the score and whoever owns the square which lands at the intersection of the last two numbers of the scores (for example, if the score is 17-23, 7 and 3 would be the numbers to find) wins that round.

This year, we started a new tradition that I was more involved in. We had a Texas hold-em tournament, which I wasn’t too sure about until I snagged second place and a $4 cash prize. Games are taken very seriously in my house, and my success amazed my family members because I am known as the one who cannot bluff or lie to save my life.

One of my absolute favorite traditions is making my great-grandma’s cinnamon rolls. She taught me how to make them a few years ago and always insisted that mine were better than hers, which I knew was a lie but appreciated immensely nonetheless. She was one of my favorite people in the world. Unfortunately, she passed away in November of 2013, a month shy of turning 103. It’s been a little hard to make the rolls knowing she won’t be there to eat them, but that’s why I have to keep on making them. Every time I do, I remember her and what an amazing person she was.

Another, newer tradition we’ve been doing is my grandma gives each of us grandchildren $10 and by Christmas, we are supposed to have donated it to some cause that we think deserves it and have a little explanation as to why we did so. I enjoy this new tradition because it reminds me to be grateful for the things I have and for my family every day.

See also, our Facebook page with curated news articles at http://www.facebook.com/NorthStarReports
–
The North Star Reports: Global Citizenship and Digital Literacy, The Middle Ground Journal and The College of St. Scholastica’s collaborative outreach program with K-12 classes around the world. We acknowledge North Star Academy of Duluth, Minnesota as our inaugural partner school, and the flagship of our program. We also welcome Duluth East High School and other schools around the world. The North Star Reports has flourished since 2012. For a brief summary, please see the American Historical Association’s Perspectives on History, at:

The North Star Reports publishes edited essays from our students, particularly from those who are currently stationed, or will soon be stationed abroad. Students have reported from Mongolia, Southern China, Shanghai, northeastern China, The Netherlands, Tanzania, Ireland, England, Finland, Russia, and Haiti. We also have students developing reviews of books, documentaries, and films, projects on historical memory, the price individuals pay during tragic global conflicts, and analysis of current events from around the world. We will post their dispatches, and report on their interactions with the North Star Reports students and teachers.

(c) 2012-present The North Star Reports: Global Citizenship and Digital Literacy http://NorthStarReports.org The NSR is sponsored by The Middle Ground Journal and The College of St. Scholastica. See Masthead for our not-for-profit educational open- access policy. K-12 teachers, if you are using these reports for your classes, please contact chief editor Professor Liang at HLIANG (at) css.edu

20 responses to “Food and Rituals – Thanksgiving (US) — The North Star Reports – by Allison Brennhofer. Sponsored by The College of St. Scholastica and The Middle Ground Journal”