As I mentioned in a couple of my previous posts, my HECUA group had toured two different cities that we would eventually split off and move to for our internship portion of the program, half in Belfast and the others Derry/Londonderry. I happened to be in the Derry-group and would intern for the non-profit organization called ‘Headliners’.

Headliners is just one of many organizations aiding in bringing Northern Ireland to a more peaceful future, but what makes this organization unique is who they work with. Headliners works predominantly with children and young adults and during my time at there, I worked with 8-year-old kids, 19-year-old young adults, and all those in-between. Because Northern Ireland has sectarian history, a lot of Northern Irish people that I had met said that in general, N. Irish don’t meet someone of the opposite religion until they go off to university, making it easier to dehumanize the ‘other’. So the main objective of Headliners is to bring youth from different backgrounds together by having the Catholic and Protestant schools congregate in hopes they would recognize that the ‘other’ isn’t all that much different from them. To help these kids come to realize the similarities within the two communities, Headliners has them collaborate on a variety of different media projects whether it be recording a radio podcast, writing pieces for Headliner’s magazine, or photography and videography endeavors. 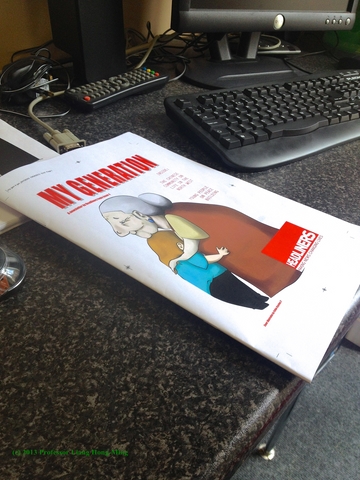 At the end of the program, Headliners hands out an evaluation form that the kids would fill out, giving the organization some feedback on what’s working well and what may need some adjustment. It was interesting to see how much these kids either enjoyed working with Headliners as well as the ‘other’ or if they had been uncomfortable with the mixing of what to Northern Ireland refers to as ‘ethnicities’.

Photo 1 of the now published magazine we (at Headliners) were editing at the time.
Photo 2 of Derry’s Cityside from across the Peace Bridge on the Waterside