My study abroad program in China is a total of eleven weeks: ten of which are spent intensively learning Chinese at an accelerated rate (two semesters of language learning compressed into ten weeks) and one week of vacation to do whatever I like and go wherever I choose. Last week was my vacation, and I traveled with two friends to Southern China—specifically Guilin and Zhangjiajie. 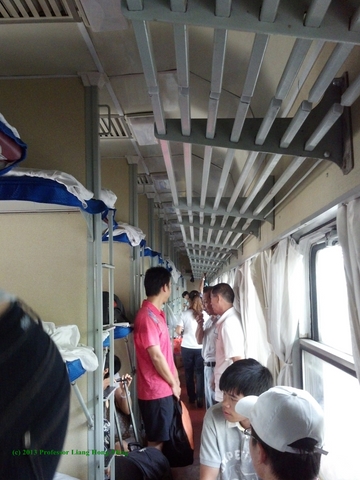 I had an absolutely wonderful time and I feel I can honestly classify my vacation as a once-in-a-lifetime adventure. The two cities I went to were gorgeous and bustling with nature surrounding both—rice terraces, mountains, lakes, rivers, and more. There’s so much to be said that I don’t believe I could fairly cover all of it in one update. One aspect of my trip in particular was much different than I expected it to be, mostly because I did not hold any expectations good or bad.

Trains. It’s a mode of transportation that everyone knows of, but varies so much across the world and even within countries. I have taken trains in the U.S.A., but in my hometown of Duluth there is only the tourist train that goes up the scenic North Shore along Lake Superior and its purpose is not solely a means of transportation. In China, the first train I took was the high-speed train from Tianjin to Beijing. The distance between these two cities is approximately a three-hour bus ride, but on a high-speed train the length of time shrinks to only thirty minutes. It was fast, convenient, and a smooth pleasant experience. I erroneously assumed all train rides would be this easy.

On my vacation last week, my friends and I were traveling eastward from Guilin to Zhangjiajie which is a lengthy distance and requires a layover to switch trains in Liu Zhou. The first train ride, from Guilin to Liu Zhou, was about three hours long. For some unknown reason, my friends’ seats were right next to each other, while my assigned seat was a few rows back. The train station was hectic. Everyone was pushing and shoving to get on the train, and I wasn’t sure why everyone was so frantic to get on the train first because I knew there was no way the train was going to pull away while people were still trying to board. When I boarded the train, I soon found out. By the time I had reached my assigned seat, a man was already seated there and all the seats around were full. I showed him my ticket, with the seat number, and he reluctantly gave me the seat, and then moved his 3 stacked bags of grain in front of me. I discovered what many might already know, but I wasn’t previously aware that people could still purchase train tickets last minute even if all the seats were taken. Perhaps I should’ve stood to let him remain in the seat, but I’m not familiar with proper train etiquette.

That train ride was uncomfortable for a few reasons. One, there were very very few foreigners, and apparently foreigners don’t frequent the area as there was a hefty amount of relentless staring. I stuck out like a light bulb so I tried to distract myself by reading, but the man with the grain stood over me and stared down for three hours so I didn’t even finish the first chapter. The second reason the journey was a little uncomfortable was because of the lack of space. I could only face sideways with one leg in the aisle and the other bent with my knee to my chest because of the space the grain occupied. The train was set up so that three chairs are facing three chairs and people store their belongings on the overhead shelf, between the chairs, on their laps, and in the aisle.

The train, just like a city bus, stops many times along the way to let passengers off. There was no overhead voice or message system to let passengers know which stop was which, but people seemed to know exactly when to get off, so I gathered that many people frequently traveled this route. As more and more people disembarked and there was more space, the stress and cramped feeling gradually dissolved and the mood became significantly lighter. People talked and joked more with each other and it felt like there was a sort of comradery among the passengers. When I asked the girl across the aisle if she knew when it would be my stop, five or six people around leaned in to hear the foreigner speak. Their attitude toward me loosened a bit when they heard I was speaking in Chinese. I’ve found that people are much warmer and willing to help when you speak to them in Chinese, and I’ve heard that this applies in many other foreign countries as well. It’s important to make the effort to adapt—“When in Rome, do as the Romans do.”

After an hour-long layover, my friends and I boarded the sleeper train—an eleven-hour train ride (from 9 p.m. to 8 a.m.) from Liu Zhou to our destination, Zhangjiajie. The choices for the overnight sleeper train in order from cheapest to most expensive were hard-seat, hard-sleeper, and soft-sleeper. The hard-seat option is just what it sounds like: hard seats that don’t allow for a good sleep if any. The hard-sleepers are beds in compartments with six beds to a compartment, each bunk stacked three beds high. There are no doors to the hard-sleeper compartments, so there is no privacy on this portion of the train. As for the soft-sleepers, the most expensive but also the most comfortable option, there are compartments with closing doors and two bunks, stacked two high in each compartment, for a total of four beds per compartment. Unlike the previous train, no tickets are sold for the hard-sleeper and soft-sleeper sections as soon as the beds are all full.

I opted for the middle option, the hard-sleeper, and I was assigned a middle bunk. Although the bed was narrow, I found it to be very comfortable and I slept like a rock. It was wonderful.

All in all, though my experience with trains varies greatly every time, I would definitely choose to take a train again in China. Typically the trains are convenient, cheaper than flying, and take less time that driving a car or taking a bus. Although my comfort-level was up and down for every ride, I think it’s is largely due to cultural differences. As I’ve mentioned previously, personal space is not as high a priority in China as it is in America. I believe this is simply because China’s massive population does not allow for as much space, especially when it comes to transportation.