I had no expectations when I made a trip to the zoo and the water park. I went on a Friday afternoon and I had just finished my final for the semester that morning. My mind was exhausted and I needed to celebrate the weekend with something completely non-school related. I ventured out to explore Tianjin. 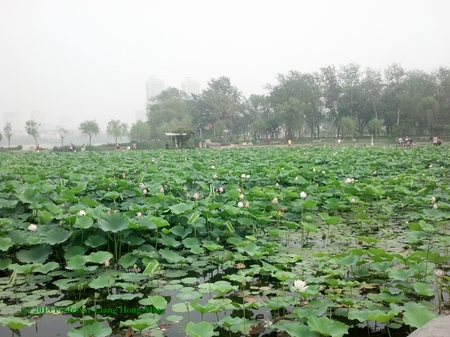 My friend Tim and I took the subway two stops over to the Tianjin Zoo and Water Park which are almost melded together. The water park is not what we would consider a water park to be in America, but literally a park with water in it. The park was built around a series of small lakes and there are pathways and sculptures around the lake and lotus plants with big green leaves floating in the water. Although there are no rolling hills or grass, and only a few trees planted here and there, this little bit of nature came as a welcome relief. I didn’t even realize that I needed to relax and de-stress from the previous week until I walked into a tranquil area. I think being around lakes reminds me of home, living next to Lake Superior, and I felt a little pinch of homesickness.

When we entered through the gate, we saw so few people walking around that the zoo felt almost deserted. Despite the attempt at creating a natural atmosphere, the brick and cement ground and buildings make the zoo feel constrained. It reminded me a little of a zombie apocalypse movie where there are only a few humans left fighting to survive against the zombies and the sky is gray and foggy.

I must admit, the zoo was a bit run-down. The paint was not kept up and the litter was scattered on the ground here and there. Just as in a zoo in the U.S., we headed from one exhibit to another. Friday afternoon must be a quiet time for the zoo, because there were just as few animals out and about as there were people. We walked through the mouth of a humongous plastic tiger’s head to get to the tiger and lion exhibits. This exhibit was comprised of a square room where you could look through the glass to see small rooms with walls separating each individual animal. There were three lions and approximately a dozen tigers, and in each room the ceiling, floor, and walls are completely cement. There was no nature of any kind in these exhibits, but some had palm trees painted on the walls. I noticed each exhibit had a back entrance for the animals to go into a private field so perhaps I just received a bad impression of their living conditions. Still, from my point of view, their lifestyle looked dismal.

It’s surprising to see what animals are housed in a zoo because it’s an indication of what people are unaccustomed to and interested in seeing. Both red and giant pandas were in the zoo as well as zebras, rhinoceroses, alligators and other reptiles, deer and even moose. I couldn’t help but laugh when I saw the “common squirrel” being exhibited when squirrels are an everyday sight back home. I took a picture of the sign and went to take a picture of the squirrel when I stopped myself. Why am I taking a picture of a squirrel here when I could see one in my backyard at home?

The last stop in the zoo was to see the Asiatic elephants. There were two rooms, each housing one elephant. The walls were dirty and feces covered the ground. Like with the tiger and lion rooms, there was no nature of any kind, no attempt at comfort. The elephant had enough room to turn around and walk maybe three steps at most to the other side of the room but little more than that. Had both elephants been in the same room, they wouldn’t have been able to move. The elephants stood still except for their heads, which were bent down and swaying rhythmically back and forth. Their eyes stared blankly at the ground and they appeared to be in a daze. The room was nearly dark even in the middle of the day. There was nothing for the elephants to do, nothing to occupy their time but their own isolation.

I don’t know how to summarize my trip to the zoo. I would like to say the nature of the water park or the dismal conditions of the zoo represented something, but I couldn’t tell you what. From a distance, I drew a parallel to American zoos until I looked a little closer and realized that what I thought was familiar was actually utterly unknown to me. Many things are like that here—malls, street, traffic, restaurants — they are reminiscent of home until you sharpen your vision and realize these aspects of life are completely different. When you put them all together, it smacks you in the face and you realize you are truly in a different world, a foreign land.