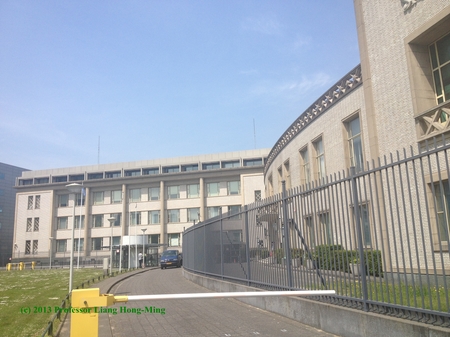 I am currently about a week into my work in the media department of the United Nations International Criminal Tribunal for the Former Yugoslavia (ICTY). So far, the work has consisted primarily of updating information on the ICTY’s website and ensuring that all of the information listed has been legally established as factual through court proceedings. The work itself can be somewhat tedious but it has given me an opportunity to delve into the legal processes of the Tribunal as well as the factual background of various cases at a level of detail that I would not likely have done on my own. One of the main concerns of the media department-now that those who work here have realized that generating good PR in order to establish a positive public image is nearly impossible-is to build and preserve a record of what has transpired both in the Balkans and here at the Tribunal. It is an interesting task in the sense that one has a feeling of editing history to some extent. All of the Judgments of the Tribunal, as well as other court documents, will remain publicly available but, given that Judgments are usually in excess of 300 pages each, will probably not be widely read by the public. As a law student interested in exactly the issues the ICTY concerns itself with, I have yet to read a Judgment in full, despite sorting through them for information on a daily basis. It seems most likely that the condensed and easily digestible information that is selected and presented through this office will in many ways be a large part of the de facto public record of the crimes against humanity, war crimes, and genocide that occurred as Yugoslavia disintegrated. Selecting which information is “valuable” or “interesting” enough to be included in this record can prove to be challenging at times.
———-
For all of the North Star Project 2013-2014 Reports, see https://mgjnorthstarproject.wordpress.com/
For all of the North Star Project 2013 Summer Reports, see http://www2.css.edu/app/depts/HIS/historyjournal/index.cfm?cat=10
—
The North Star Project 2013-2014 School Year Reports: The Middle Ground Journal’s collaborative outreach program with K-12 classes around the world. We acknowledge North Star Academy of Duluth, Minnesota as our inaugural partner school, and the flagship of our K-12 outreach program. We also welcome Duluth East High School, Dodge Middle School and other schools around the world to the North Star Project. The North Star Project has flourished since 2012. For a brief summary, please see recent articles in the American Historical Association’s Perspectives on History, at:

The Middle Ground Journal will share brief dispatches from our North Star Project student interns, particularly from those who are currently stationed, or will soon be stationed abroad. We have confirmed student interns who will be reporting from Mongolia, Southern China, Shanghai, northeastern China, The Netherlands, Tanzania, Ireland, England, Finland, Russia, and Haiti. We also have students developing presentations on theatrical representations of historical trauma, historical memory, the price individuals pay during tragic global conflicts, and different perceptions of current events from around the world. We will post their dispatches here, and report on their interactions with the North Star Project students and teachers.