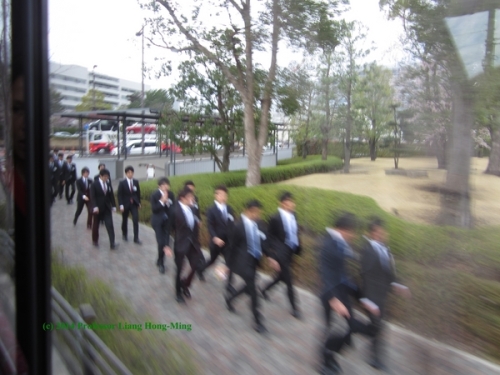 During my time as an undergraduate student, I studied abroad for a year in Japan at Akita International University to further my studies in my specialized area of Asian studies. Akita International University is one of Japan’s cutting edge schools in which all classes are taught in English; it is also recognized as being one of the first universities in Japan to base its school system on the American university system.    Despite using a whole different system than most Japanese universities, the job process for these college students remains the same.   I was lucky to observe this process because I was there during both the winter and spring semesters.  It intrigued me as the job process there is a totally different than what you would find in the United States.  The amount of education Japanese companies want students to have is also very different.  In the sections below, I will explain the job process many Japanese students face and the consequences should they obtain too much higher education.

The job hunting season for Japanese students usually begins in early winter of their senior year and ends at the end of spring.  Many students either go out and search for opportunities or find them at job seminars that companies host for prospective students in which they are told about the company.  Students then can talk to a recruiting representative and leave their resume if interested.  If selected they will be called back for interviewing in April. Some students even get informal offers before this time, depending on the student’s resume or situation.  I was lucky to witness a couple of these seminars being held at AIU when I studied there.    I observed not only how different the recruiting process was but how different the resume was.   The resume was styled as pre-arranged information sheet which listed your education and other information, along with a passport photo of yourself.   While I was shopping at the mall during job- hunting season, I often observed students taking resume photos in an arcade-like photo booth designed for that.    Another thing I saw at the mall during this season was the number of major sales for black suits which were the standards for both men and women when attending seminars, interviews and other functions associated with the job hunting process.   During this time  many students would also miss class to attend these functions, which some professors accepted as the norm and some did not, often getting upset with the students and lowering their attendance grade or giving them an extra assignment.  It was mentioned a couple of times at the beginning of class.  I had two professors, one who accepted and one who did not.  The differences in views between the professors might have been associated with cultural differences as the professor who accepted the absence was Japanese while the other was American.

The job process is very stressful for students because if they do not get a job during this time, they will be out of luck until next April. The hiring process only happens once a year.
The stress associated with this deadline has in recent years caused suicide rates among young individuals to increase.   Some of the other causes have to do with Japan’s declining economy, depression associated with not being hired and a decrease chance of them being hired for the next job hunting season as they are now no longer newly graduate.

EDUCATION AND THE HIRING PROCESS

Japanese companies do not favor degrees higher then a bachelors when hiring new workers, and actually discourage it. It is their belief that master’s degrees and Ph.D are essentially worthless as they do not teach students any job skills. Instead they feel that they can provide the required knowledge through company training and specialized school, if need be.     Japanese Companies are also very picky about when a student graduates from college.  As I mentioned above, companies usually want new graduates who will be easy to mold from the get- go.   So if you miss the boat during the senior year, a student’s chances of getting a job next year will decrease because they will now be competing against the next batch of new graduates.   So the bottom line is that unless your advanced degree is in  something like law, medicine, engineering or some science, your chances of getting a job with many Japanese companies is slim.  Most students who do go on to get advanced degrees  in other areas go into academia or  work or study in another country, like the U.S where the job prospects are higher.