A few weekends ago I took a trip to Erdenet, Mongolia’s second-largest city.  While there, we did some hiking around and came across a number of ovoos, which is what you see pictured below.  While I don’t know a lot about ovoos, I do know that they are a part of shamanism, the belief system that has traditionally been most prevalent in Mongolia. 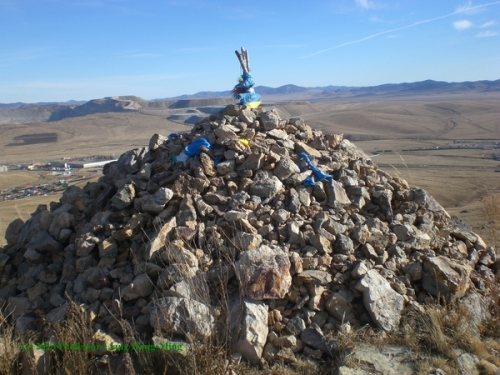 An ovoo is a pile of rocks, or cairn, which marks a religious site.  In Mongolia, you often come across them at high places, like mountaintops.  When you come across an ovoo, it is customary to circle it clockwise three times, then pick up a rock and add it to the pile, so the ovoos are continually growing.  Ovoos are also often drapped with hadag – blue, silk scarves used for ceremonial greetings, especially during Tsagaan Sar, the Mongolian Lunar New Year (but which you also see everywhere in Mongolia throughout the year — for sale in markets, in temples, tied to bridges, etc.)

While I don’t know much about shamanism in Mongolia or the deeper meaning behind the ovoo, for me, ovoos symbolize what I find most alluring about Mongolia: the ancientness, vastness, and uniqueness of this land.  A land in which you never know when you might come across a beautiful, mysterious rock pile which has marked a sacred space for an unknowable number of years, decades, or maybe centuries.
———-
For all of the North Star Project 2013-2014 Reports, see https://mgjnorthstarproject.wordpress.com/

For all of the North Star Project 2013 Summer Reports, see http://www2.css.edu/app/depts/HIS/historyjournal/index.cfm?cat=10
—
The North Star Project 2013-2014 School Year Reports: The Middle Ground Journal’s collaborative outreach program with K-12 classes around the world. We gratefully acknowledge North Star Academy of Duluth, Minnesota as our inaugural partner school, and the flagship of our K-12 outreach program. We also warmly welcome Duluth East High School and Dodge Middle School to our collaborative program.