‘Sunday Bloody Sunday,’ a song by the rock band U2, refers to the 1972 event known as ‘Bloody Sunday’, which had unfolded in the Bogside.  On January 30, 1972, Civil Rights marchers made their way around the streets of Derry in what was anticipated to be a peaceful protest against Irish Internment.  The British Army stationed in Derry created a blockade preventing the parade from entering the city center.  The bulk of the parade rerouted and made its way to the Free Derry Corner in the Bog.  However, some of boys stayed to throw stones at the soldiers, as a result, some soldiers relocated to the Corner with the rest of the parade, and within the next thirty minutes, chaos ensued, leaving 13 civilians injured and another 13 dead, 7 of those shot dead being under the age of 20. 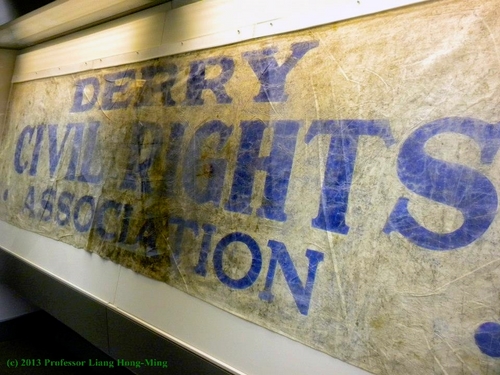 Bloody Sunday is still holds a lot of relevance in Northern Ireland today.  The victims both dead and alive have yet to receive the justice they’ve been searching for as the soldiers involved had been deemed innocent.  Surviving victims and the families of the deceased have continued to campaign for another inquiry of the events and wanting to clear the names of the civilians and bring the soldiers they deem guilty to justice.

These past months since I’ve returned from Northern Ireland, I have seen references to Bloody Sunday used as a marketing ploy a handful of times, namely in the food industry, and this has been a cause for some controversies.  With that being said, in this day and age where it is almost second-nature to be politically correct, I assume these references are made more with the song in mind, unknowing of the U2 reference to the 26 victims of Bloody Sunday.  Instead of becoming grossly offended at another person’s ignorance, it is at times like these when educating someone will be more effective than belittling them.

[Photo 1] Banner used in the Civil Rights march now hanging in the Museum of Free Derry. The dark spot in the middle is a blood stain from Bloody Sunday.
[Photo 2] The mural ‘Bloody Sunday’ (painted by the Bogside Artists) in the Bog depicts the death of Jackie Duddy with Fr. Daly waving a bloodied, white handkerchief.
[Photo 3] The Free Derry Corner in the Bog.
———-

For all of the North Star Project 2013 Summer Reports, see http://www2.css.edu/app/depts/HIS/historyjournal/index.cfm?cat=10
—

The North Star Project 2013-2014 School Year Reports: The Middle Ground Journal’s collaborative outreach program with K-12 classes around the world. We gratefully acknowledge North Star Academy of Duluth, Minnesota as our inaugural partner school, and the flagship of our K-12 outreach program.