Picnic in the Mongolian Countryside

A few weekends ago I joined the staff of all language departments of my university for their annual countryside picnic. 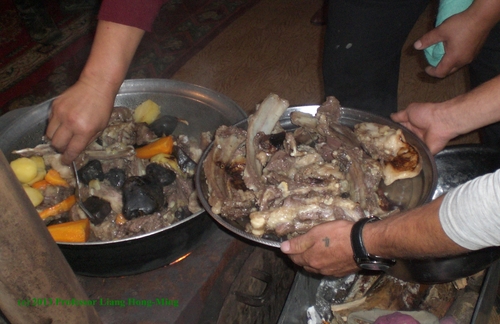 I was told to be at the school at 9 am, although the first hour or so of the day was spent sitting on a bus waiting for everyone who got the memo, which I missed, that there is no reason to come on time.  More and more teachers (on “Mongolian time”) trickled onto the bus throughout the hour, all of which were in great moods and untroubled by their lateness as I would have been.

At some point it was mysteriously determined that we had waited long enough, and the bus finally rolled out of the parking lot.  As soon as it did so, the bus’s karaoke system was taken advantage of; a microphone was passed around and music was blared. 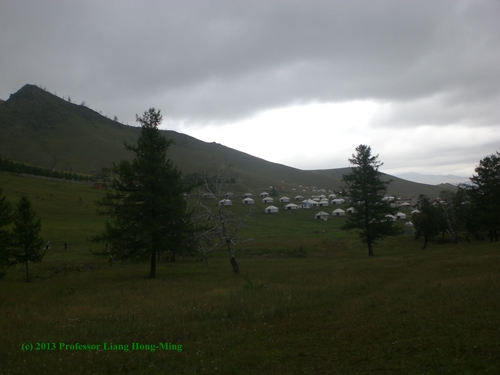 Not long after karaoke was started, the vodka was too.  Two male teachers walked up and down the aisle of the bus full of teachers — bottle in one hand and communal cup in the other — passing out shots.

After about an hour we reached our destination, which was a ger resort not far outside of Ulaanbaatar.  (A ger is a Mongolian traditional dwelling — what we would call a yurt.)  The resort was essentially a ger hotel; it consisted of numbered gers which could be rented and a large central building which served food and alcohol.

As soon as we got to our gers (which were fancier than normal gers — they had attached bathrooms and electric heat), it was snack time. Once every teacher had brought out his or her contribution, our small table was heaped with treats.  The most popular item seemed to be sausage, which was eaten on bread with a slice of cucumber on top. 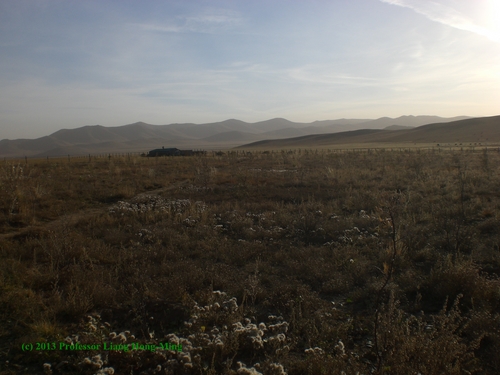 Our snacking was quickly interrupted, however, by lunch.  The dining hall served us salad, followed by mutton soup with fried bread, followed by more mutton, with rice and a side of fried mashed potato.  It was incredibly delicious, but incredibly filling.

Once our lunch wrapped up, it was time for the day’s opening ceremony (I’ve noticed it seems to be popular to start events with opening ceremonies in Mongolia — the school year started with one and so did a teaching conference I recently attended).  The ceremony took place in a grassy area near the gers, which was surrounded by beautiful steppe and a small forest.  The ceremony involved giving gifts to teachers and administrators who were leaving or retiring and giving gifts to new staff members.
Every gift of course included vodka, each bottle of which was immediately passed around the audience with a cup.

After the ceremony ended, it was time to dance.  A large speaker was brought out and everyone was on their feet.  Two songs that seemed to be big hits were “Cheri Cheri Lady” (Modern Talking, 1985) and “Brother Louie” (Modern Talking, 1973).  I seem to hear these songs everywhere I go in Mongolia which fascinates me, because they are old (in my opinion), and I had never heard them before coming here.  Maybe it’s my age, or maybe Mongolian’s have different taste in music.

The rest of the afternoon consisted of more dancing, more snacking, playing games, lying in the grass, and the non-stop distribution of vodka.

Another lovely Mongolian thing that occurred throughout the day was arm and hand holding; my friend and co-teacher Oyuna, who had been made responsible for the foreigner (me) for the day, held my hand or linked arms with me wherever we went.  Fortunately it wasn’t because I was viewed as the incompetent foreign person (although I usually am), but was a kind, common Mongolian expression of friendship which I appreciated receiving.

After several hours of relaxation, we reconvened for more food.  At this point I was still stuffed from lunch (which I didn’t know was possible), but I wasn’t going to turn down horhog.  Horhog is a traditional, uniquely Mongolian food which is very popular at outdoor events.  It is a sort of stew made with vegetables (carrots, potatoes, and cabbage,) and of course mutton, cooked with stones in it.

When the horhog was ready, we all sat in the grass on the hillside, with the sun setting beautifully in the background.  When it was brought out (two giant pots carried by four men), the first thing that was removed from the pots and passed around the crowd were the hot stones.  I was handed one to pass quickly between my fingertips until it was no longer hot and was told that doing so would keep me healthy through the very cold Mongolian winter.

Once our stones cooled and our future health was secured, we feasted on the mutton and vegetables, of course with a side of milky tea (hot milk with black tea and some salt in it) and several shots of vodka.

After dinner it was time for more dancing, this time on the basketball court, with another group of guests at the resort.  As I was spun around to Modern Talking songs until I learned all the words, I had one of those wonderful moments of vivid awareness that I am really in Mongolia…finally…this place I waited for months to hear if I would be going to, this place I spent even more months preparing for and wondering about, this place I never could have imagined I would travel to.

As the sun set, the boom box’s battery died, and we slowly made our way back onto the bus, I was satisfied and grateful for the truly Mongolian day I had gotten to be a part of.  Of course the day wasn’t actually over at this point; little did I know, 4 straight hours of karaoke were to follow.  Though unbelievably tired by the time I returned to my apartment, it was a great day of Mongolian food, music, tradition, and friends.